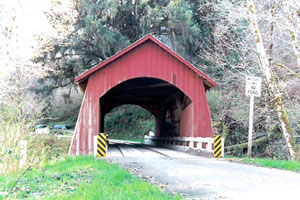 Background:
The rustic covered bridge spanning the North Fork of the Yachats cost the county only $1,500 when built in 1938, and was the last covered span constructed by veteran bridge builder Otis Hamer.

Located just seven miles from the salt water of the Pacific Ocean, this trim little bridge is one of the few to escape the "graffiti artists" so common in many other covered bridges.

Since the covered span is the only access for families in the area, the bridge roof was removed to allow a mobile home to cross in the early 1980s.

In 1987, a loaded fuel truck crashed through a weakened approach on the bridge and the accident ruptured a fuel tank. Luckily, no fuel reached the river, and county crews soon repaired damage to the bridge.

The bridge was rehabilitated in 1989 when work crews replaced the trusses and approaches. A new roof and siding were also added.

A dedication in December 1989 officially re-opened the bridge to traffic. The engineer who designed the remodeling stated the bridge, with proper maintenance, should last another 50 years.

The nearby community was established in 1880 as Ocean View, and was changed to Yachats in 1916 in salutation to a local tribe. The name "Yachats," according to the tribe, means "at the foot of the mountain," an appropriate nomenclature for both the bridge and the community.