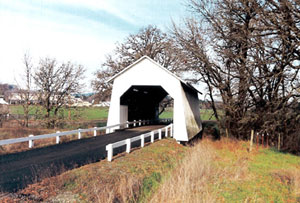 Location:
Located on the Oregon State University campus in Corvallis. From I-5, exit 234 at Albany, travel southwest on Highway 20 to Corvallis. Follow Highway 34 southwest toward Philomath. Turn right (north) on 53rd Street and park in the County Fairgrounds on the west side of 53rd. Follow the foot path (Campus Way) on the east side of 53rd to the bridge.

Background:
The bridge was built using a standard Highway Division design dating back to the 1920s. Following its construction in 1954, the bridge provided access across the Willamette Slough on Irish Bend Road, approximately 15 miles south of Corvallis.

Following installation of two large culverts and realignment of the road in 1975, the Irish Bend covered span languished until it was dismantled in 1988.

The span may originally have been constructed over the Long Tom River about 30 miles to the south and later moved to the Irish Bend site, but research on this issue is not yet completed. Various plans had been proposed for use of the bridge, including floating it downriver to be relocated to a new site.

Through negotiations an agreement was reached between Benton County officials and Oregon State University to reconstruct it on university property in Corvallis The Irish Bend Advisory Committee raised over $30,000, with Benton County providing an equal amount in matching funds, for the relocation of the span.

Because no maintenance had been performed for more than 15 years, many of the timbers had rotted. New stringers were donated by a local mill, and an engineering firm provided the foundation without charge.

The bridge site is part of a path through the research farm between 35th and 53rd Streets on the west side of the OSU campus. While the property is owned by the university, maintenance will be carried out by the Benton County Parks Department, since the bridge is part of a bicycle and pedestrian path along Oak Creek.