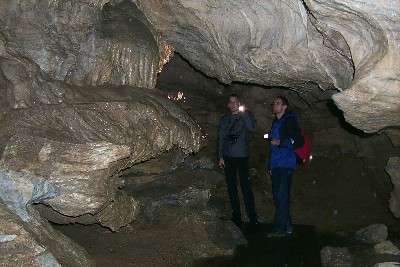 Elijah Davidson didn't know what to expect as he chased after his dog, Bruno. Here he was in the hills of Southern Oregon on a cold day in 1874 and Bruno was chasing a bear into a dark hole.

Davidson could hear Bruno's howl but could not see him. He had no choice but to follow.

Into the side of the mountain he went, striking matches to light his way. Finally, as the last match flickered and died, the pair were deep inside a pitch black cave. The bear was in there as well.

Feeling his way through uncharted caverns and passageways, Davidson found a chilly stream. He followed the water and gradually crawled his way back to daylight. Bruno did the same.

Elijah Davidson had accidently discovered what is today known as the Oregon Caves National Monument, a collection of chambers and passages that experts estimate are 3 to 5 million years old.

That dark hole in the side of a mountain is now the entrance to a geologic wonderland for countless visitors between March and Thanksgiving each year. 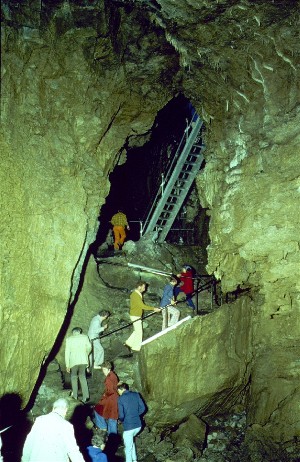 Taking a Look Inside

Take the unique tour through the Oregon Caves, a trek along an asphalt trail complete with low ceilings, narrow passages and an occasional tight squeeze.

Some quick rules to keep in mind:

My tour was a captivating half-mile walk through a myriad of chambers and rooms with fascinating formations. And, of course, there are plenty of names - the Imagination Room, soda straw stalagmites, the Petrified Forest room, the Banana Grove, the River Stix, Paradise Lost, the massive Ghost Room and more.

Tour interpretor Julie Anderson says the caves are 3 million to 5 million years old. Each person who visit finds something special. "People are fascinated by it," Julie says. "It's human interest. A cave can tell us about ecology. It brings a tells us all so much about the underground world and it's all knew to most people.".

Life in the Cave 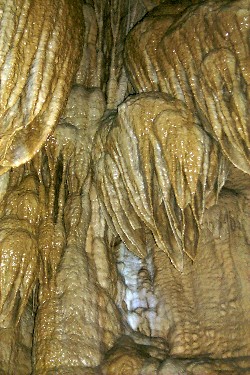 Julie enjoys telling the story of a fossil find near the Ghost Room here in 1996. The fossilized remains of a jaquar were found to be about 8,000 years old. Fossils of a nearby girrzly bear, however, were much older. Carbon dating placed the fossils at about 50,000 years old. That makes this cave bear the oldest known grizzly on the North American continent.

"I once saw a deer's antler covered by calite," Julie adds. "There's so much beneath the ground to see and explore."

Betsey Wittick and Guy Sidora of Bainbridge Island, WA, took the tour and found it an easy walk to the deep beyond.

"It was wonderful," Betsey says. "It was not difficult to do, but it was thrilling. Learning about how long things take to form and the effects of the environment were fascinating. It's so expansiveness yet it's so fragile."

It's a little bit out of this world. It was unlike anything else," Guy adds. "It's magic."

HOW TO FIND THE OREGON CAVES

Oregon Caves is at the end of a winding, Highway 46 about 20 miles uphill from Highway 199 and Cave Junction.

The Caves are open from mid-March through the Thanksgiving weekend.

Hours change depending on the season. In general, tours begin sometime between 8 and 10 am and end at 4 pm.