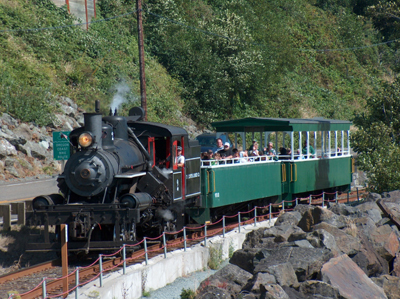 Seeing the North Coast by Rail

Whenever you visit a place, if you keep your eyes open, you can catch a glimpse of small surprises – on in the case of the Oregon Coast Scenic Railroad, 60 ton surprises steaming along the tracks on the north coast.

Sure you can see many of the areas the train goes by speeding along Highway 101, but riding in the train – which travels at about 10 miles per hour – you can catch glimpses of the native birds and other wildlife along the tracks. With a route that also goes along the Tillamook Bay bar, many times you can spot ships going out to sea.

During 2010 train riders will also get a front row seat of the U.S. Army Corps of Engineers rebuilding the jetty.

“There are things on this line you just can’t see driving along in your car,” says Scott Wickert, chief mechanic for the group.

The OCSR is a non-profit group, run by volunteers, who want to keep the history alive of the old-time steam locomotives. Near the marina in Garabaldi, they have a workshop, where trains can be brought in from the Oregon rain and worked on, and it also serves as a headquarters for the group.

“The one thing we all share in common, is that we all love old trains,” says Wickert. “Aaron and I volunteered the Mount Rainier Scenic Railroad together and when we were able to get our 1910 steam locomotive, we started looking for a place to set up.”

Thanks to the Port of Tillamook, the two men were able to start running in 2003 and have been growing the organization ever since.

Their train, which runs on 42 miles of track, but usually only makes trips that are anywhere from 10 to 25 miles in length. In 2007, part of the track was washing out during a storm, keeping their train isolated from normal train traffic.

“In some ways it’s a blessing,” Aaron Zorko, engineer, says. “We can run when we want to, and this is a trip that you can’t see anywhere else.”

During the summer months trains leave Garibaldi at noon, 2 p.m. and 4 p.m. Trains leave Rockaway Beach at 1 p.m. and 3 p.m.
In the off season, there are dinner excursions on the train which has closed cars as well. They run during Valentine’s Day, Mother’s Day and other dates chosen by the group.

During the winter months of 2009 and into 2010 the group was working on restoring a 1924 coach, something that could make their summer trips more appealing to those who don’t like the idea of the open air ride.

“It will also nearly double our capacity,” Wickert says. “On the summer train we can hold 112, with the new car we are going to be able to add another 96.”

In the caboose of the train the group has a small gift shop and also sell rides there for a little more than their modest ticket prices.

About the Oregon Coast Scenic Railroad: A non-profit museum organization dedicated to preserving the history and pleasure of railroading. They operate summer train rides from Garabaldi to Rockaway Beach along the oceanfront track using a 1910 Heisler Steam Locomotive.

What to bring: Weather appropriate clothing, while the summer months are mild, the train has mostly open-air cars, although a closed coach is expected in 2010. A camera and binoculars will also help you see some of the wildlife and other sites along the route.

Season: During the summer months, from Memorial Day – the last Monday in May – through September, mostly during the weekends, with trains leaving Garibaldi at noon, 2 p.m. and 4 p.m. In July and August the trains run Friday through Monday at the same times.

1. Make a reservation as trains fill up fast during the summer months.
2. Bring binoculars to watch wildlife.
3. You can get off the train in Rockaway Beach or Garabaldi to explore, just make sure you catch the last train back.