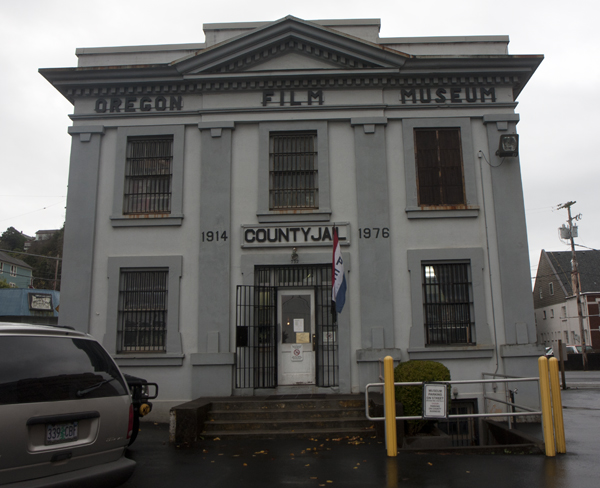 A dad was behind the camera, while his daughter and son were sitting behind the wheel of an old Nissan pickup, talking back and forth.

“You guys are completely off script, you know that don’t you?” The father asked, as his children started giggling.

You too can bring out your inner Martin Scorsese out in what is one of the most fun, interactive and interesting museums on the Oregon coast, if not the state. The Oregon Film Museum is housed in the old Clatsop County Jail, and has several features that make it a must-see for any film fan.  I like to think of it as the IMDB.com of Oregon movies.

The Jail itself has a history in the movies, being the one used in the breakout scene in “The Goonies.” The 1985 movie was one of the most famous to be shot in Oregon, and let’s be honest, anytime your state is home to a Steven Speilberg and Richard Donner film, you should promote it.

“This is the Mecca for fans of the Goonies,” said Sam Rascoe, director of marketing for the Clatsop County Historical Society.  “In 2010 was the 25th anniversary of the film, and the same year we moved into this space.”

Rascoe said it all started in 1908 with the filming of “The Fisherman’s Bride” and has continued ever since.

“This isn’t your traditional museum of things in cases you can’t touch,” Rascoe said. “This is really more of an interactive experience. We want people to explore the experience.”

When you get your ticket to the museum, it is in the shape of a set pass – and even looks like the real thing. It has a QR code on it, so if you decide to take advantage of the faux film sets, you can then edit your creation and email it to yourself. When you do enter the sets, there is actual camera equipment and rigging, lighting and scenes from some of the movies filmed. There is even some areas that feature green screen. The museum does have a computer bay with the editing software and the ability to send it to your email – museum staff do review the films to make sure they are appropriate.

“People love doing the scenes, and we see a lot of creative things shot,” Rascoe said. “We have real professional grip equipment and lighting. The whole idea is there with some of the equipment involved.”

But this is also a museum, and on one side of the museum, you get a window into the actual jail cells, which are filled with movie paraphernalia. There is also a monitor with a video showing students who were involved with the filming of “Kindergarten Cop.” The students interviewed members of the crew of the popular Arnold Schwarzenegger film, and their final product is on display. On the back side of the cells there are plaques with information about the jail and the Goonies.

One of the other items that has been left in the old jail is the mug shot area, so you can take your picture with the booking plaque and everything in the museum – great for Facebook profile pictures. That room also has a wall with notes from Goonies fans from all over the world, and a monitor that shows scenes from many of the movies shot in Oregon.

The museum receives very little government funding, so donations and visiting the museum gift shop is always helpful to keep the operation going. They are looking to expand the interactive areas and keep up with the wear and tear that comes with an attraction like this one.

“This has been getting more and more popular,” Rascoe said.

What to bring: Your creativity, because you can shoot short movies, so enjoying the museum with friends and family is a great way to create memories that you can share.

Tip: Rascoe said the museum is very busy during the summer months, and on weekends especially. With it being in such a small space, visiting the museum during the fall or winter is a great time to get to play with the sets, without feeling rushed or crammed in.

Season:  The museum is open year-round.

Getting there:  The museum is located at 732 Duane Street, Astoria. It is one block off of Highway 30 near downtown Astoria.