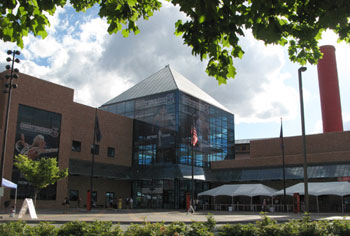 Have you ever created your own cartoon or played Connect Four with giant robotic arms? Have you ever been inside a real submarine or made flubber in a science lab? At OMSI you can do all of this and more in one crazy day. With the only IMAX theater in Oregon, a laser light planetarium, a motion simulator, a real US submarine out front, and rooms filled with science activities, the whole family will enjoy the varied activities at OMSI and everyone will have a blast as they learn something new.

Nestled against the Willamette River, hidden in the East Industrial district of Portland, a large, squat building houses OMSI, the Oregon Museum of Science and Industry. Here, kids and adults can experience science up-close, playing with all sorts of hands-on displays of physics, chemistry, biology, design, outer space, and other subjects. Filled with science labs and robots, inventions and computers, OMSI is a nest of creation and discovery. Complex scientific phenomena are spelled out for kids and adults to make it approachable and, even more importantly, loads of fun.

It's not what can be found on the informational plaques that makes this museum so interesting, or the displays of inventors past and present. It's not the loads of history and modern questions presented to kids and parents that make it engaging but the roll-up-your-sleeves-and-dig-in experience that makes OMSI one of a kind. To learn about wind power, kids can make their own sailboat and set it afloat on a miniature windy lake. In the chemistry lab, your little budding scientists can don goggles and lab coats to mix up squishy flubber to take home or watch demonstrations by real scientists. You can also experience an earthquake in the simulator, build a bridge, or shoot off a plastic bottle rocket.

Part of the fun of OMSI is the building, itself. Donated by Portland General Electric, its original purpose as a steam generator plant is still on display. While in the physics lab, you can learn about how electricity works and see it in action with demonstrations that will literally make your hair stand on end. Right outside the lab, a giant turbine in the floor with diagrams and explanations of how it used to work show how the building used electricity to power daily life in Portland. Everywhere you go in OMSI, there are hands-on activities with practical explanations and questions to follow them up.

Turbine Hall is where most of the action takes place. It echoes with the sounds of pistons and giggles as kids explore the properties of physics and chemistry in the labs, play with the physics of sound and light upstairs on the mezzanine, learn about design and fly a plane in the computer lab, and of course, shoot foam balls out of tubes they can put together in the inventor's ball room.

Younger kids can have fun in OMSI, too. Upstairs in the Science Playground, kids 6 years and under can discover science through interactive activities made just for them. Right next door are the Animal Secrets, a spot where kids can look into the secret lives of the animals in their own back yards. You'll also see modern environmental issues and questions up-close in the Earth Science Hall and learn things you may not have known about your own body in the Life Science Hall.

About OMSI: Now one of Oregon's most popular museums, OMSI has been around since 1944. Today it is one of the top ten science museums in the country. Not only is OMSI a learning playground for all ages, it also houses Oregon's only IMAX theater, a laser light planetarium, a motion simulator, and is home to the USS Blueback Submarine, which gives daily tours. Rotating exhibits make their way through the museum as well, including a recent Star Wars exhibit and the popular Body Worlds 3.

Tips: There are so many things to do and see at OMSI, you may want to plan for a whole day. Check their website before going for current IMAX movies, laser light shows in the planetarium, and rotating exhibits.

What to bring: If it's a nice day, you could bring a picnic lunch and enjoy the view of Portland from the terrace while you watch bikers and joggers whiz by on the riverside trail.

Hours: The museum exhibits and science store are open from 9am to 9pm, seven days a week. Individual events, some exhibits, show times, and rotating exhibits may vary, so check their website for more information.

By Bonnie Caton
For Oregon.com