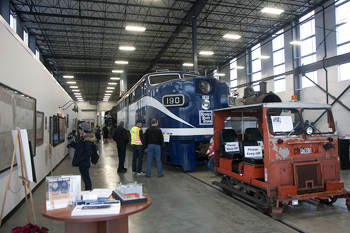 Driving to the waterfront on the east side of Portland, the first thing people normally think about is OMSI – the Oregon Museum of Science and Industry.

While OMSI is a huge attraction, that you can spend an entire day exploring and learning, there is something right next door that is also a must-see Portland attraction, the Oregon Rail Heritage Center.

As luck would have it, the center is the, well, center of rail on the Portland eastside, with not only tracks that it can access for its historic trains and cars, but also the new Clackamas County light rail line runs directly in front of it, and it’s also surrounded by working freight track.

Parking is around the corner from the center, so you get a chance to take about a half-a-block walk, where you will see trains getting ready, and in 2015 you could even ride Portland’s light rail system – called MAX – to the front door of the facility.

Sitting outside are passenger cars and a caboose, which always captures the imagination of kids and adults who love trains.
The center itself is basically a giant garage for old locomotives which are in different states of repair. Walking into the center, young and old having their breath taken away, and you can sport the train aficionados the minute they walk in the doors. And kids love it.

I visited the center on a Saturday, and there were more than a dozen volunteers wandering around, taking people on group tours and working on parts to repair and maintain the fleet of locomotives. The center doubles as a tourist attraction and workshop, so parts of the large building are cordoned off to make sure you don’t have children playing with lathes and other dangerous equipment.

But that is what make the center event more interesting, watching as a brigade of volunteers takes apart the old engines and restores them back to their former glory.

The day I was there three of the four engines in the building were in different states of renovation. The X197, a steam locomotive, had the front off and you could see how the water would boil and then go through a series of pipes to make the massive machine move. The best part for me was seeing the Spokane Portland and Seattle 700. This is one of the biggest steam locomotives still in operation today, a group of volunteers was sitting near the back, talking about how to replace some of the wheels on the giant machine. They had jacked up the machine with several 70-ton jacks, and it almost looked like it was sitting in a bay at Oil Can Henry’s.

Volunteers are more than willing to tell you what work is being done, the history of the vehicles, or even give you pointers on the interactive train simulator.

“Not too fast,” one volunteer said, as I was trying to make some good time.

If you like trains, this is a must-see, if you have kids, this is also a must see. Hearing child after child in awe as they walked into the building puts a smile on your face.

The building, in the OMSI district in southeast Portland, is a new addition for the non-profit. In 2012 the group moved into the building, and while they still have plans for expansion and to enhance the attraction, it looks great.

While admission to the museum is free, you can pay to get a ride in one of the historic cars. The train ride is available nearly year-round and when I was there at the end of winter, you could ride down Oregon Pacific Railroad’s East Portland Division along the Willamette River and through the Oaks Bottom Wildlife Refuge. The ride was about 40 minutes long. During the spring and summer months the train also makes stops at Oaks Amusement Park.

What to bring: There is quite a bit of walking involved on a concrete floor, so make sure you have comfortable shoes. In addition, the building is very light, so photography isn’t really a problem. I visited during a pretty dark and rainy day and was still able to get good photos of the engines.

Tip: Depending on the season you visit the center, the times of the train rides change. So make sure to either call or visit its website before you arrive, otherwise you could be waiting for up to an hour for the next train. Also, don’t be afraid to ask questions, as the volunteers love talking about trains and are very helpful.

Season:  The center is open year-round.

Getting there:  The center is located at 2250 SE Water Street, Portland, OR.