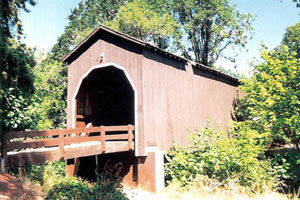 Location:
From Highway 99 (West B Street) in Drain, turn south onto 2nd Street and go one block to West A Street. Located in the city of Drain, behind Drain Civic Center at 205 W. A Street.

Background:
Although the official date of construction of the current Pass Creek Bridge is listed as 1925, members of the Umpqua Historic Preservation Society attest the span was constructed in 1906.

Mamie Krewson Matoon, who was born in 1894, remembered a covered bridge over Pass Creek as a child. "It was an old bridge at the time. Long before Drain had lights, we packed a lantern on dark nights when going through it in a hack drawn by two horses."

The original bridge at this site was built in the 1870s along the Overland Stage Route, as Drain was an important junction which linked the Willamette Valley and Jacksonville. An 1895-era photograph shows the wagon bridge and adjacent railroad bridge, both being covered. The wooden rail span was replaced soon after.

Old timers recall the Pass Creek Bridge provided excitement when a horse-drawn wagon crashed through the floor around 1920 while hauling supplies for a Thanksgiving turkey shoot. Although the wagon dropped below the decking, the only casualties were the words uttered by the driver, the drowning of turkeys and splashing of supplies into the creek.

It is probable the covered wagon bridge at this location was either rebuilt or replaced in 1925, displacing the earlier span. Holes in the lower chords indicate that it may have been salvaged from another bridge. Today a concrete bridge now crosses Pass Creek where the old wooden structure once rested.

In the fall of 1987, after the roof and siding of the covered bridge were removed, a 90-ton crane lifted the trusses and moved them one block away where the structure was reassembled the following year.

The wooden bridge had been closed to traffic since 1981, causing the handful of local residents surrounding the span to maneuver under a cramped railroad trestle to get to their homes.