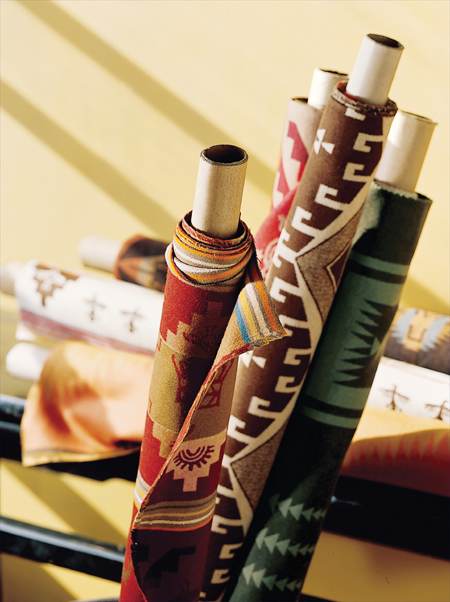 The fact of the matter is there just aren’t that many woolen mills – or any other type of textile mills – left in the United States.

With cheaper labor abroad, more and more companies send the work off-shore, where they can hire several workers, to one American worker.

However, there are still a few places left in the U.S. where you can see production of wool being woven into blankets, such as Pendleton Woolen Mills.

With two mills, one in Washougal, Washington and another in Pendleton, Oregon, the 6th generation family-owned company is committed to keeping fabric production a U.S. Made affair.

The Pendleton site was built in 1909 out of concrete and the building is three-stories tall. Much of the history is outlined in a small museum the company has put together in the retail store they have inside the mill. They even have on display a copy of the original bond issue where the financial backing of the townspeople combined with equal support from the Bishop family made it possible to reopen the town's defunct mill.

The company offers tours several times a day – more during the summer months than in the winter – and they can take anywhere from 20 minutes to a half an hour. Just watching how the materials are made, and looking at the old building make the tours well worth the time.

Production starts at the third floor of the facility, with scoured wool they get from Washougal, and then through a series of machines, works its way down the floors until it is woven into the distinctive jacquard blanket fabric. Then the fabric is inspected by hand to assure Pendleton's high standard of quality, "Warranted to be a Pendleton."

Mill Manager, John Boston said that about 14,000 people a year tour the facility, and due to the noise, headphones are given out while tours are given. The looms make a lot of noise and many are automated.

“Our busiest time is around the Pendleton Round-Up,” Boston said. “We will be wall-to-wall people in the store and on the tours. ”

He said they had been offering tours for more than 30 years, and it was a long standing tradition for the company.

“Normally, most manufacturing plants don’t do these types of tours, but we really want to make a connection with our customers and show them how much quality and care goes into our products,” he said.

The Round-up runs traditionally the second full week in September, and the entire city more than doubles in size.

While the mill does have a retail store attached, the flagship Home Store for the company is located in Portland. Since 2002 the 3,000 square foot retail space in downtown Portland company showcases an offering of all the various products Pendleton makes, from blankets, home furnishings, gifts and accessories as well as apparel. There are also Pendleton owned retail stores in downtown Portland, Lakeview Village in Lake Oswego, as well as at the Washougal Mill.

About the Pendleton Woolen Mills: A family-owned business for more than 140 years, and for 101 of those years they've been weaving woolens in Northwest Mills. Their expertise and technology have grown over the years, and they have translated that experience into a host of other luxury fabrics.

What to bring: Comfortable shoes are a necessity as this is a concrete building with hard floors. In addition make sure you are comfortable being pretty crowded if you visit during the Pendleton Round Up.

Tip: If you have a group who want a tour, calling ahead of time can really pay off as far as waiting for an available tour. With a limited number of tours, only so many people can tag along, so if you are bringing the family, make sure to call or e-mail ahead.

Season: Tours are offered year round.

Getting there: The Pendleton Blanket Mill is located at 1307 SE Court Place, Pendleton for you GPS types.

If you have yet to get a GPS, the mill can be found exiting Interstate 84 at exit 219, the Pendleton/Milton Freewater exit, and then turning left onto Highway 11. Stay on that street and it will turn into SE 10th Street, then turn into SE Court Place. The mill is on the left.