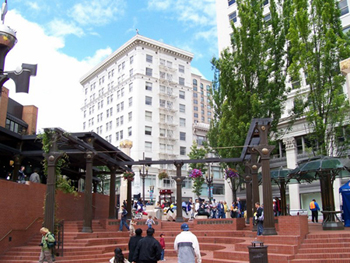 Exactly on the other side of the world from the fascinating undersea valley called the Crozet Basin, just 75 feet above sea level, there is a more accessible, very different, but just as remarkable place. The Pioneer Courthouse Square is a brilliantly laid out public space, so loved and important to Portland, Oregon's daily life that it is fondly known as the city's "living room."

Locals and visitors are certainly made comfortable in every nook and cranny of this multifaceted plaza, literally by design. All week long people of all ages and walks of life enjoy the Square's features, which are equally diverse: chessboards built into stone columns, a collection of public art, food carts and even a flower stand. Catering to one of the city's obsessions, a coffee shop is conveniently perched on the park's northwestern corner. All this only adds to the elegance and beauty of the multi-hued brickwork, decorated columns, and a granite waterfall fountain.

With all its amenities, the park is still roomy enough for the 26,000 people flowing through it almost every day, partly due to its role as the main public transport hub, leading riders to 3 corners of the metropolitan area and everything along the way. It can also handle 25,000 people coming together at once, as they do for the holiday season's tree-lighting. A record crowd of 55,000 gathered in 1994 to hear then-First Lady Hillary Clinton speak at a live appearance.

The Square's - and Portland's - social calendar includes everything from a splendid Festival of Flowers in the spring to the castle craze of summer's Sand in the City, as well as heart-warming winter celebrations. Music concerts, movie nights, and health fairs also take place there. Its prominence in the city's life, however, also includes less happy times, as befits a true living room: public outcry finds a home in the form of vigils and political rallies. All in all, the park hosts over 300 events a year, some sponsored by the Square's management, some by corporate and non-profit groups.

For help deciding what to see or do (or how to get there), a visitor need only walk between the cascading waters of the fountain, recalling the beautiful falls along the gorge. Ensconced in the incline of the park is the Visitor's Information Center, run by the Portland Oregon Visitor Association to provide assistance and facts about the square, the city and the state. TriMet, the area's much-admired public transit system, also staffs a resource center at the same location, offering schedules and trip-planning help.

It is easy to see why the Project for Public Spaces clarified its 2004 opinion that the Square was "one of the best, if not the best urban public Square in the United States" by naming it 3rd Best Park in North America in 2005. "This square sets the bar for public space programming," PPS explains. The plaza is "a model for other cities [because] there is not another active park like ours," says Katie Brown, Pioneer Courthouse Square's Marketing Director. City planners nationwide agree, drawn to learn from this urban oasis since its construction in 1984.

The design by Willard Martin's team, submitted to a 1980 Portland Development Commission competition, prevailed over 160 other entries from all over the country because of its truly local vision. Rejecting the notion of a covered space, the locally-based group acknowledged that the residents love their town, cherish public connection, appreciate open vistas, and have learned to live with the region's rain.

Details on the columns depict the flowers that give the City of Roses its nickname; the built-in seats that form two amphitheaters (one with an echo chamber) and a speaker's podium invite social discourse; additional artwork portrays scenes from the town's past and present, complete with a life-sized bronze sculpture of a Portlander volunteering his umbrella. In one corner, an elegant towering machine announces the weather for the next 24 hours everyday at noon, literally with a fanfare.

There is no single factor that connects this park in the heart of Portland to the hearts of its citizens. Many even have their names literally written on it. In keeping with the city's tradition of public involvement, individuals happily raised the money needed to finish the park's construction by buying one brick at a time, having their name etched on it in exchange. "The brick ownership program lets [people] take part in Pioneer Square," says Ms. Brown of the fundraising initiative, adding that anyone may still purchase and find his or her brick by using the Square's website.

The project's completion was the second time that individuals pitched in to see this city block reach its potential. Originally the site of Portland's first schoolhouse, it was purchased in 1883 by railroad magnate Henry Villard. When he was unable to fulfill his dream of a hotel to serve the influx of train travelers, private contributions came together and finished building the luxurious 17-story Portland Hotel.

The hotel remained THE place to dine, stay, and be seen, until the vagaries of history left it forgotten and abandoned by the end of the Depression. In the 1950's the hotel was demolished and a parking structure took its place as life fled to the suburbs, much like everywhere else in the country. It would be another 30 years or so before the heart of Portland would beat strongly again, prompting the birth of Pioneeer Courthouse Square.

A remnant of the block's history is integrated onto the east side of the park, where the original iron-wrought gate to the Portland Hotel still stands. A few feet away, a signpost names the distances between the Square and other destinations around the world, such as sister cities Guadalajara and Suzhou, and even an extraordinary place exactly around the world: the Crozet Basin.

Although the real Frodo Baggins and Elvis Presley may not have actually bought the pieces of Portland history bearing their names, someone thought they deserved their own brick in the Square. Perhaps if these exciting travelers had personally had a chance to fall in love with this urban marvel, they would have done so themselves.

What to bring: A camera, journal, or recording device - there is always something to see here, and you might want to remember it. If you want to explore or take a walking tour from here, bring comfortable shoes. Bring a hat or umbrella if you are not as rain-friendly as Portland residents. You can also bring your lunch here and eat while you listen to a concert or watch a hackey-sack game.

Hours and Fees: As a public park, the Square is open all days and hours, with the exception of certain holidays, when the city may choose to disperse large crowds due to safety and security concerns. The Portland Oregon Information Center is open Monday-Friday, 8:30 a.m.-5:30 p.m.; Saturday. 10 a.m.-4 p.m.

Getting There: From Salem: Take I-5 North to I-405; take exit #299B, merging onto Hwy 26 toward City Center. Continue and take exit #1A onto SW Harbor Dr. Turn right onto SW Naito Pkwy, then left onto Morrison St, up to Broadway.
From Seattle: Take I-5 South and merge onto I-405 via exit #302B toward Beaverton. Take exit #2A (Couch St) toward Burnside St. Continue onto NW 15th Ave and turn left onto SW Alder St. Take a right onto SW Broadway, and follow up to Morrison St.
Most public transport bus lines have stops within 2 blocks of the Square, and all 3 lines of the MAX (Metro Area Xpress) stop at the South and North ends of the park.

Tips: There are drinking fountains on every corner of the square, and public restrooms available during the Portland Oregon Information Center's hours of operation. Because of its location, the Square is the perfect location in between art-browsing, shopping, and sightseeing destinations. An ATM is located on the side of the café.

History: Pioneer Courthouse Square takes its name after the oldest Federal building in the Pacific Northwest, located directly across 6th Avenue, on the east side of the park, currently home to the Ninth Circuit Court of Appeals. Originally purchased for $24 and a pair of boots, this park served the pioneers of Portland as the site of the first schoolhouse, Central School. Making room for a railroad magnate's dream, the school was moved, and plans were put in motion for the construction of a luxurious hotel to serve the jet set of the time. Henry Villard's fortunes collapsed, leaving behind little more than the foundations. Nicknamed Villard's Ruins, the site provoked from scorn to fear in the general public, until a group of individuals, including key Portland figures such as William S. Ladd and Simeon Reed, came together and completed the investment required.

The 17-story Portland hotel was the hub of Portland nightlife through the Depression, but not much longer. With the Fifties, down came the opulent and up went the practical: the block housed a parking structure for nearly three decades. In 1979, as part of a nationally-acclaimed plan to revitalize the downtown area, a public square was suggested for the site, instead of a larger parking lot. Meier & Frank, the city's oldest and largest department store, not only agreed to sell the property, it also contributed substantially to the plaza's construction.

Designed by William Martin and his team, Pioneer Courthouse Square was dedicated on April 6, 1984, a fitting present on Portland's 133rd birthday.

Portland offers many places to be entertained, educated and involved. Pioneer Courthouse Square has been doing it all for 150 years.