Rocky Butte - Stunning Views with a Bit of History 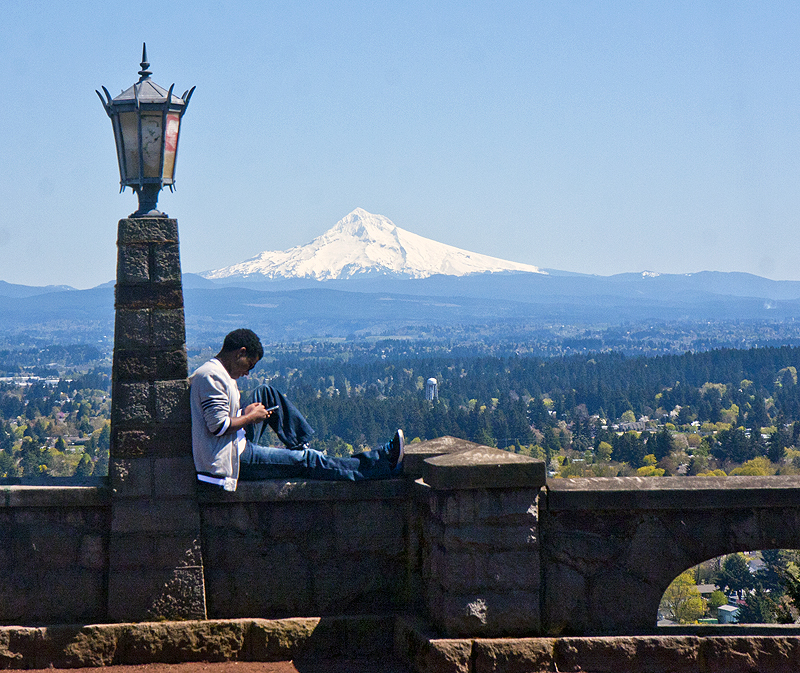 As a local Portlander, I have always wondered about the butte that sits along Interstate 205 in Northeast Portland called Rocky Butte.

So I took a drive to the top of one of Portland’s highest east-side points and was amazed at what I found.

At the top of the drive, which was about a mile up a very curvy NE Rocky Butte Road, there is a city of Portland park called Joseph Wood Hill Park . The drive alone is worth the trip, as you will see some stunning views on the way up. There is also a historic tunnel which reminds visitors of the craftsmanship of many of the local highways, such as the Historic Columbia River Highway in the Columbia River gorge.

Along the way there are also many houses perched on this rocky spire that rises out of fairly flat land around it. The homes are on stilts and have some stunning views, which is just a preview of what is to come when you reach the top.

Joseph Wood Hill Park sits atop Rocky Butte like a crown jewel of Portland parks. After finding a park spot – and parking is mostly along the streets – you walk up to the 2.38-acre flat park that is surrounded by more rock walls and lampposts. There you will find people picnicking, walking dogs, taking photos and even practicing rock climbing on one of the many routes to the summit. The best part about the park is that even though it is on top of a butte, it’s a flat area that is perfect for Frisbee, a picnic or just laying around people watching.  It’s feels like someone took a small neighborhood park, and placed it on the highest point, so each way you turn, there is a more stunning view.

To the west you can look through the trees and see downtown Portland in the distance, with the St. John’s Bridge in plain view and looking amazing. You also get a wonderful view of the West Hills of Portland and during the evening hours the light show is something not to be missed.

Looking northwest near one of the park’s two entrances, you can see Portland International Airport. The best part is that planes will be landing and taking off, basically right in front of you like little model airplanes. Several people I saw at the park had the portable scanners and were listening to the control tower as they watched cargo and commercial flights land and take off from the airport. On a clear day it is really fun to see how long you can watch the planes fly off into the distance.

Looking to the east you can see the Cascade Mountain Range, with of course, Mount Hood being front and center. A little to the north you can also see Mount St. Helens in southern Washington which had a major eruption in 1980 which blew off its peak.  You can sometimes see Mt. Jefferson and other Cascades from the park on clear days. There is also a stone directional sign that points out all the mountains and the elevations of each.

For you outdoor recreation types, many bikers do ride up to the top of the butte, and it looks like a challenging climb that rewards you with the views mentioned above. The only thing I would caution bike riders about is that it is a two lane road and depending on the day there are numerous cars going up and down. Also, the road does have some pretty steep drop-offs next to it, so those with fear of heights might want to consider that before tackling it on a bike. Personally, when I went to park at the top, I found a spot along one of these drop-offs, that required me to parallel-park. I opted to find another space because while I am a bit afraid of heights, backing into the space seemed a little dicey to me.

The park also is home to two pretty substantial rock walls, which I would assume is the reason it’s so flat on the top. On any given weekend day you can see rock climbers doing rope practice and it’s interesting to watch and learn. Personally I have no desire to rock climb, but to see all the technical skill that goes into it was an interesting lesson.

The park is open until midnight, so I suggest visiting both during the day, and in the evening. It isn’t far from downtown Portland or eastside locations, and really is a great way to see the city at night.

About Rocky Butte and James Woodhill Park:  This is a 2.38-acre park located in Northeast Portland near Interstate 205 which offers some stunning views around the Portland metropolitan area. The park was acquired in 1988 and includes a historical site, statue, is a vista point and is also a reservable wedding site.

What to bring: This is an open-air park with no overhead structures, unless you count the radio tower in the center of the park. So dressing for the weather is vital when you visit. The best views come on clear days, however sometimes you can get lucky in the fall with low fog and see planes pop out of the clouds and see the mountains also peak out. A camera is also a must have, as is a picnic lunch or blanket if you want to lounge in the park for any length of time.

Tip: First off make sure that you visit on a clear day, and I prefer visiting in the late afternoon. That way if you want to spend a couple hours looking around or relaxing you can not only watch the sunset but then see the city light up as darkness falls. When going to the park on a nice day, also see if you can avoid a day with the dreaded inversion. This is a situation where after a few nice days in the Willamette Valley, it’s still sunny, but it’s hazy. This will make for some great sunset photos, but viewing mountains becomes more difficult.

Season:  The park is open year-round from 5 a.m. to midnight.

Getting there:  Rocky Butte is located near the Interstate 205 and Interstate 84 split in Northeast Portland. The best way to get there is from I-205 to exit 23B for Killingsworth Street. Take the Sandy Blvd Westbound ramp and then take a right on 82nd Avenue. From there follow the signs to the great park.