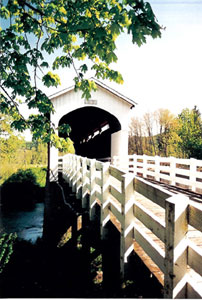 Location:
Travel four miles southeast of Cottage Grove on Row River Road to the intersection of Layng Road. The bridge crosses the Row River at this location and is located one mile from the Mosby Creek Bridge, also on Layng Road.

Background:
As with many Lane County landmarks, the Currin Bridge was named after an early pioneer family in the area. Nels Roney constructed the first covered bridge at this site in 1883 for $1,935.

When it was to be replaced in 1925, Lane County again considered a contract for the bridge construction. The lowest bid was $6,250. The county felt it could save money by building the bridge itself.

County employees, with the supervision of brothers Miller and Walter Sorenson, constructed the bridge for $4,025, realizing a substantial savings for the county.

Architectural distinctions include single piece hand-hewn chords and cross-wise planking on the approach. It is Lane County’s only covered bridge with white portals and red sides.

Lane County closed the bridge to traffic when it was bypassed by a concrete span that was built only an arm's length away, making the old covered crossing difficult to photograph. In late 1987, the bridge was mothballed by removing an approach and placing a wire fence in the portal. Additional work included structural repairs and fumigating for insects.

During the 1993-95 Oregon Covered Bridge Program, Lane County received a $48,000 grant to rehabilitate and re-open the bridge to pedestrian traffic. Work items included truss repairs, a new rail system, a new synthetic roof, repaired siding and house painting. The successful restoration of this bridge is another example of the dedication of the State and local governments to Oregon’s covered bridges.