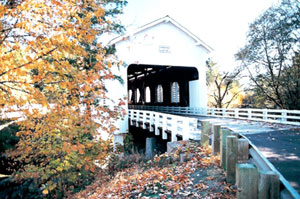 Background:
When Dorena Dam was built in 1946, plans were made to span the Row River at the upper end of the reservoir. Government Road along the west bank was completed in 1949, and the Dorena Bridge was built a year later, after the reservoir was filled, at a cost of $16,547.

Miller Sorenson, Lane County bridge foreman, supervised the construction. The bridge is often referred to as the "Star Bridge" because it provided access to the nearby Star Ranch.

Once a large and proud estate, the ranch has been reduced to about 100 acres.

The state-designed bridge was bypassed in 1974 by a concrete span. Repairs were made to the structure in 1987, as part of the county's "mothball" plan for covered bridges. The asphalt flooring was removed, chords fumigated and other rehabilitation work was completed.

The original town site, named for Dora Burnette and Rena Martin (by combining parts of their first names) is underwater at the bottom of the reservoir. A railroad in the vicinity served the mining camps until the gold mines played out.

The lumber industry developed and used the rails to ship logs to Cottage Grove. Until 1987, the rails were used by a steam-powered excursion train. The cost of liability insurance increased too much to keep it going, and only freight traffic passes today.

Lane County requested and received grants from the Oregon Covered Bridge Program totaling $59,000. These funds were used in the 1996 reconstruction of Dorena Bridge to create a wayside park. The project included replacement of the substructure, replacement of approach spans and extensive repairs to the covered span. When the house was resided, windows were installed for light and improved air flow.