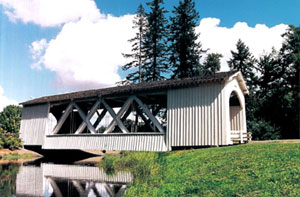 Location:
From Interstate 5 take Salem Exit 253 east on Highway 22 for 15 miles to the Stayton /Sublimity turnoff. Travel south one mile to Stayton. Turn east on Marion Street to Pioneer Park.

Background:
Prior to 1986, the Jordan Bridge spanned Thomas Creek in neighboring Linn County several miles east of Scio. The original bridge location had once been the site for a dam, a cheese factory, two mills and a general store.

When Linn County announced the aging Jordan Bridge was to be replaced in 1986, Stayton residents asked if they could take title to the structure. A covered bridge preservation company was formed, enlisting the help of numerous volunteers and Marine Corps reservists for the 6th Engineering Battalion in Salem.

The span was rebuilt over the Salem Power Canal to serve as a foot bridge connecting two parks. The process of rebuilding the Jordan Bridge occupied nearly two years, culminating in a dedication ceremony in June 1988.

In the Tuesday, December 27, 1994, edition of The Stayton Mail, the headlines read "A community dream in ashes." The bridge had caught fire December 20th at 2 a.m. when Christmas lights ignited the roof. Photos of the still standing charred trusses depicted the scene. The city decided to demolish the trusses and burn what remained of the bridge.

Local citizens toiled throughout 1997 and 1998 to construct a new covered bridge at the site. The new bridge incorporates glue laminated members for added strength and was dedicated in September 1998.