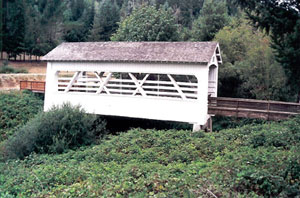 Location:
From Roseburg travel west on Highway 42 approximately 31 miles to Remote. Sandy Creek Bridge is on the north side of Highway 42, 1/4 mile west of the Remote exit.

Background:
The Sandy Creek covered bridge carried traffic on Oregon Highway 42 until it was bypassed in 1949. The 60-foot span was considered short in comparison to other covered bridges built on Oregon highways.

The bridge is strengthened by two crossed Howe truss members on each chord, a rarity in short covered bridges.

An additional aspect of the bridge is the use of large-framed windows on both sides of the structure, maximizing the illumination of the bridge interior.

In late 1981, a plan was developed to make a park at the bridge and use the old wooden structure as a covered picnic site. The Myrtle Point Lions Club adopted the bridge as a major project.

Work at the site began in 1982 and included a new roof, replacing boards and structural pieces, clearing brush and applying a coat of white paint. The park was dedicated in 1984 and now includes a tourist information center at the bridge site.

The nearby community of Remote received its name, it is believed, due to its geographic isolation.