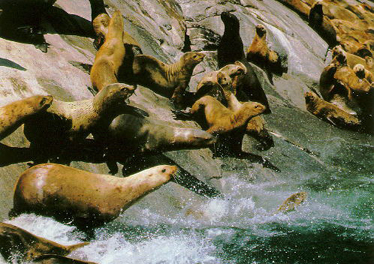 Just four hours from Portland, the Sea Lion Caves features the largest sea cave in the world and an opportunity to see not only sea lions, but scores of other wildlife in their natural habitat.

What to Bring: The temperature inside the cave is the same as it is if you would be walking on the beach. In the winter, prepare for the colder temperatures. You will also need comfortable shoes as you will have to walk around in the cave for your best viewing angle.

Binoculars are also suggested, so you can focus in on the different wildlife that the habitat has to offer.

Flash photography is not allowed in the cave because it disturbs the animals. So low-light film or a tripod will be needed to take snapshots.

Getting There: Located on Highway 101, 11 miles north of Florence - and 38 miles south of Newport -- on the Central Oregon Coast. From Portland, take Interstate 5 south to Exit 195-B to Highway 126 toward Florence. Take Highway 101 north 11 miles to the caves.

Season: Open every day but Christmas, with different attractions depending on the season. For example, in the spring and summer the sea lions are outside the cave sunning themselves. In the winter months many take refuge inside the cave.

Tips: While you might imagine spelunking down into a cave filled with sea lions, the sea lion caves offer a low-impact way to visit the largest sea cave in the world. A short walk takes you to an elevator that lowers you approximately 200 feet to the base of the cave. Walkways and staircases take you to the view area - so there is no need to brush up on your caving skills.

There's much more to see than the sea lions. Osprey, whales and other coastal wildlife may be seen in the area depending on the time of year. From the cave's lighthouse viewpoint you can see the Heceta Head Llighthouse which is one mile to the north.

Prepare to be on your feet for your visit - self-guided tours can take anywhere from 45 minutes to a couple hours, depending on how long you want to spend watching the sea lions and other attractions.

History: The cave was discovered in 1880 by Oregon ship captain William Cox. … Officials at the caves estimate the cave began formation about 25 million years ago and now is the height of a 12-story building. … The elevator was added in 1961 to give people access to the basalt rock cave.

Notes: As the osprey flew by, carrying a perch from its talons and looking like an old World War II bomber, Hod Johnson was reminded of just how great work at the Sea Lion Caves really is.

"You never know what you are going to see here on any given day," says Johnson, the general manager of the coastal attraction. "I have been here since 1986 and I am still noticing things that are new everyday."

This year Johnson expects more than 100,000 people to take the elevator down the more than 200 feet to see the largest sea cave in the world. From across the country people will be visiting the caves and other attractions along the Central Oregon Coast.

"This area really is a great place to visit," Johnson says. "You have the dunes nearby and a national forest close, too. Many people stay at one of the resorts in the area and then use it as a base of operations - taking day trips around the region."

Johnson says that people coming to the caves should expect typical Oregon coast weather, with wet days and cool temperatures. But if you are ready to experience one of Oregon's most interesting - and strong smelling - habitats, then the cave is an easy way to see the more than 200 Steller sea lions who call the cave home.

"It's hard to get an actual count of them," he says. "But we think we have about 200 regular resident sea lions. You come for the sea lions, but you get to see some amazing views and other wildlife."

Johnson says he also tells people that whale and bird watching are also popular on the grassy bluff.