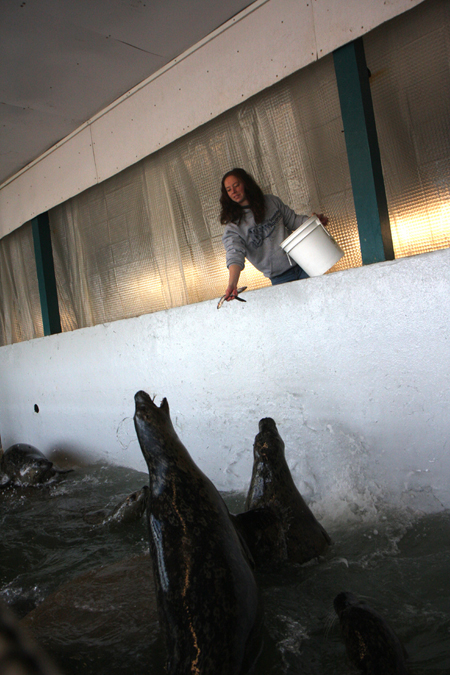 If you are going to visit the Seaside Aquarium, and want to get the full experience, be prepared to get wet.

Wet hands, wet feet, and as one little 5-year-old girl found out, wet from head to toe.
Since 1937 the Seaside Aquarium has been open along the Seaside Promenade looking out at the Pacific Ocean. Yes, it’s one of the few aquariums – if not the only aquarium – in Oregon where visitors get to feed the seals, touch starfish and learn all about tide pool and other sea creatures.
“I am a very lucky guy to have a job like this,” says Keith Chandler, general manager of the aquarium. “I basically get to watch people have fun all day, it’s a great job.”
Chandler said that the aquarium is open year round, and feeding the 11 harbor seals is by far the most popular attraction he has.
“People also love seeing the octopus,” he says. “But far and away the seals are the most popular.”
For a small fee, visitors can buy trays of cut up fish, walk up to the platform and start tossing the fish into the seal tank. Don’t worry, the seals are able to go to an area if they want to be out of public view and have plenty of space, Chandler says.
Be prepared, however, because once you start throwing the fish to the harbor seals, they suddenly start to do tricks, talk, and even clap and dance for the chance at a treat.
“All the seals taught themselves those tricks,” Chandler says. “They are quite the hams if they think there is food involved.”
In fact when you walk in the door, many times there will be a seal peeking out of a window to see when their next snack is coming. Chandler said that there are normal feeding times – something that is pretty fun if you can schedule it. While excited to get snacks from the public, the seals turn it up a notch during feedings – even jumping out of the water to get at the whole fish.
But the aquarium is more than the seals, in the back there is a touching pool where you can get your hands on tide pool creatures, an open air tank with an octopus, and many, many tanks with everything from white sturgeon to eels to view. The aquarium even has a display with a 25-pound lobster that was rescued from a boiling pot back in the 1990s and died when someone tried to steal it from the aquarium a few years later.
Chandler says that one of the missions of the aquarium is to educate people about the things they see, so someone is usually wandering around the aquarium ready to answer questions and give people short lessons about the animals.
“We are a smaller aquarium than the other aquariums on the Oregon coast, but we are very family friendly and try to make sure everyone has a great time,” Chandler says. “We like to take the time to show people really what these animals are about. And, really, where else can you get splashed by a seal?”
Chandler said that for people wanting learn more about sea life along the Oregon coast he also helps with the Estuary Discovery Program that is put on by the city of Seaside every July and August. The program is free and is offered Saturday mornings.
About the Seaside Aquarium: Started in 1937, this small aquarium is located on the ocean front on Seaside’s promenade called “The Prom.” The main attraction is feeding the seals, but there are a quite a few exhibits in the back of the aquarium that make it a great learning experience for children and families.
What to bring: Clothing you don’t mind getting wet if you plan on feeding the seals. The creatures splash and frolic, so make sure you dress appropriately.
Season: The aquarium is open year round and is open every day at 9 a.m. Summer is the season that is the most crowded, so for a visit that is a little more quiet and you are able to get one-on-one time with the staff about the different exhibits.
Getting there: The aquarium is located in downtown Seaside, right off Highway 101.
Tips: Visiting during the off-time is a great way to get some private lessons on the different types of animals you can find at the Oregon coast. In addition after your visit at the aquarium, take the time to stroll down “The Prom” as it’s a wonderful way to see the beach – without sand getting everywhere.
By Patrick Johnson
For Oregon.com