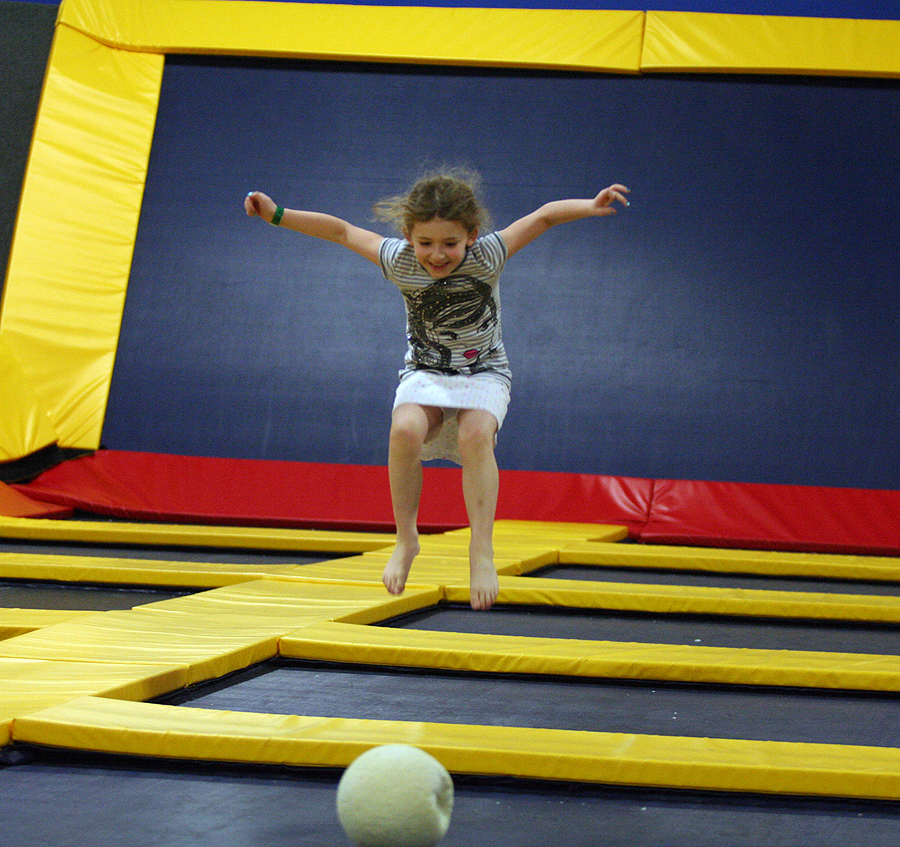 As a parent, I can tell you that it’s quite an adventure when you children start to bounce off the walls. Well now there is a solution, Sky High Sports in Tigard.

The warehouse, located off highway 217, is filled with trampolines, yes, even the walls.

From the time they open, to when they close, kids of all ages – and even some adults – spend hours bouncing, flying and flipping in the 45,000 square-foot facility.

“Kids love it here, and parents like it because kids can burn off some energy,” said Melinda Kueber, office manager. “During the winter is when we are really busy because people can come in here and get a really good workout.”

There are five separate courts for guests, separated out by age and activity so older kids don’t jump and land on younger kids.

The general access area has a huge pit filled with foam squares that children and their parents can bounce on two trampolines before entering a sea of soft foam squares.

Customers can also play extreme dodge ball, where not only do you have to aim side to side, but up and down as your targets bounce and dodge. The games can get pretty wild, so older kids shouldn’t mix with younger kids, which is why there are supervisors all around the facility, keeping an eye out to make sure there aren’t accidents.

“We have five people, one for each section, and then a floor supervisor and also a manager who floats around to keep an eye on things,” Kueber said. “It’s nice for parents because then they don’t have to worry about the kids.”

And parents are catered to as well at the facility, with a nice lounge area that includes pool tables, comfy couches and big screen TVs to watch the game.

“It’s a great way to let the kids have fun and relax a little,” Kueber said.

But adults aren’t left out of the trampoline mix, with entire families enjoying themselves throwing balls, doing flips or simply chasing each other around. Which is why since October 2010, Sky High has become a hot spot in the area and a tourist destination.

“We have had people from as far away as Maine call and want to reserve time for a party,” she said. “Sky High is getting to be known as a really fun place to come and jump around.”

Many people wonder if the facility is safe, with all the bouncing and kids flying around. Kueber said while they do require people to sign a waiver, their trampolines are specially designed to have more give, and all of the frames are covered by safety pads. In fact, each of the trampolines is elevated above the floor higher than normal, to where you have to climb a few stairs to start the fun from a platform to make sure when you bounce, you don’t hit the floor.

“We are really starting to get a lot of regulars who come in to try tricks or just blow off some steam,” she said.

The courts can handle about 150 people, and there is plenty of parking around the warehouse. If you get hungry during all the bouncing, they also have a snack bar with normal snack bar food, such as pizza, hamburgers. However they do also carry wraps and deli sandwiches for those looking for a healthy alternative.

Sky High Sports was started by Jerry and Ron Raymond, brothers who were born and raised in the Bay Area. Jerry is a graduate of San Jose State. Each have three kids, who inspired the start of the franchise, which spans from California to Oregon, Washington, and even North Carolina, Texas and Illinois.

About Sky High Sports (from www.por.jumpskyhigh.com): Sky High Sports is a unique trampoline fun center. This facility has been designed and created for one purpose: To have FUN! Come and improvise! Whether you flip forward or flip backward, you will definitely flip out for Sky High Sports! You can free-bounce and do tricks all day, or you can join us for some of our organized activities, like our trampoline dodge ball or “Airobics” classes. As long as you like to bounce, Sky High Sports is for you. Everyone is welcome. Come by for an hour or two and have some fun.

What to bring: First off, Sky High has a strict rule about receiving a signed liability waiver before allowing anyone to enter the trampolines. Children must have this signed by a parent or legal guardian.

Kueber also said the biggest mistake people make is to wear clothing that isn’t appropriate. “People have shown up in dresses,” she said. “They are going to be on a trampoline… need I say more?” She said that socks aren’t allowed on the trampolines because they are too slippery on the trampoline surface, but tennis shoes or bare feet are OK. She also pointed out that jeans also can be too restrictive for getting the full bounce out of your step. Cameras are OK, but only allowed on the platforms and not on the trampolines, however small video cameras that strap to your body are OK.

Tip: With the popularity of this attraction, take advantage of their website feature which allows you to reserve time and number of people who plan to attend. Otherwise there have been up to two hour waits, especially during weekend days. While winter is a popular time, summer can also have the trampolines get to capacity, so make sure to reserve your time.

Season:  The gym is open year-round.