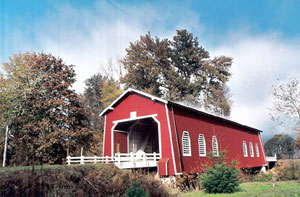 Background:
As Linn County's newest and longest covered span, the Shimanek Bridge offers an exception to the usual open-sided structure with rounded portals.

Red paint, portal design and louvered windows are features similar to the former span, which was built in 1927, and found on no other bridge in Linn County. Rods in the truss are grouped into a series of four instead of the usual three at each compression joint. The bridge shares the white painted interior of other Linn County bridges.

In 2002, a Linn County bridge crew repaired damage caused by the 1996 flood. The crew also replaced the horizontal housing material on the south end, and the structure was then repainted.

The first bridge built at this location is believed to have been constructed as early as 1861, while the first documented covered bridge was built in 1891 for a cost of $1,150.

In 1904, the county rebuilt the bridge, only to have it washed out in 1921. Its replacement lasted until 1927, when high water damaged the piers and the span was replaced.

Trees were blown against the fourth covered bridge at this site during the Columbus Day Storm of 1962. The resulting damage forced the county to restrict the covered bridge to a 2-ton load limit with single lane traffic.

The bridge was destroyed soon after, and in 1966 the current Shimanek Bridge was completed, the fifth covered bridge to occupy this site.

It has been rumored that the 1891 bridge had a welcomed accommodation of a two-hole toilet built into the foundation, a luxury not found at the current covered bridge.