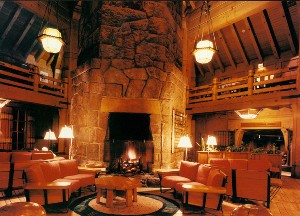 I can’t help but notice the crackle from inside the monstrous fireplace. There’s something about a warm fire that tugs at me and whispers “sit, take a moment, relax and enjoy.”

I follow the advice. I’m only a few feet from the front door of the Timberline Lodge. I’ve been throughout the national landmark and had lunch. I need to drive down from Mt. Hood and back to reality. But that fire has its hold on me.

An employee wheels in more wood, stacking it next to my fire, one of three hearths in the foyer. And for a moment I feel almost transported back to 1937 and the opening of this historic structure. Much of the lodge looks the same. The rustic wooden furnishings built by craftsmen during the Great Depression, the iron work, even the hide-strapped benches in front of the fire look as if they are originals. They probably are.

I’ve just met with Timberline’s Jon Tullis inside the lodge's front entrance after lunch in the Cascade Dining Room. Jon suggested I sit at a window table so I could look south across the tops of the Cascade Mountains. On this crystal clear January day, the scene outside made it hard to focus on the conversation.

Jon knows most everything there is to know about Timberline. He landed his first job here 19 years ago when he was handed a broom. Now, as director of public affairs, it’s Jon’s job to extol the wonders.

“We’re not an exclusive resort and we don’t want to be,” Jon says. “We have world-class cuisine and loads of charm but we’re a public building by the people, for the people.”

Timberline Lodge was constructed as part of the Depression-era federal Works Progress Administration. Construction labor from Portland and throughout Oregon found employment up here - 6,000 feet above sea level. In the 1930s, the lodge was a fresh example of Oregonians’ shared determination to battle their way out of the Great Depression. Today, the lodge stands as a state icon and a living legacy to that effort.
But Timberline Lodge is more than a building and landmark. “We’re every Oregonian’s mountain home,” Jon says. “Just come on in and grab a seat by the fireplace.”

The Timberline staff, headed by father-son operators Richard and Jeff Kohnstamm, takes great pride in overseeing Timberline. Their company has been leasing lodge operations from the National Forest Service since 1955 and, as Jon says, consider themselves stewards. “And we take that very seriously.”

A snowboarder soars above the Cascades.

The Legend of Timberline Lodge
I asked Jon about some long-held urban myths about Timberline and he was more than happy to clarify facts.

Myth No. 1: Timberline is a world-renowned ski resort.

“People flock here from all over the world in the summer because the weather is so great up here and the beauty of the mountain and the lodge have a distinct appeal,” he says. “But in the ski business, you have the day use areas and the destination ski areas. We’re a Portland day use area in the winter. Only 15% of our winter skiers come to stay at the lodge. The rest drive up from the (Willamette) Valley, ski and then go home.

“In the summer, that all changes and we do become a destination resort. We drive Oregon tourism in the summer.”

Myth No. 2: Timberline’s ski runs are on a mountain glacier.

“That’s what most people think, but it’s actually a snow field – Palmer Snow Field. A snow field has a perma-frost base like a glacier but it’s not a moving body of ice.”

"We have the longest ski season in North America and the finest summer ski program anywhere" Jon says. "But the year-around thing is a bit misleading. We normally ski in all 12 months of the year, but not always. We close the hill operation for two weeks of scheduled maintenance following Labor Day every year, and we re-open after that if there is enough snow. Most years' there is, but not always."

Some facts you can count on:
- Timberline Lodge counts more than 1.9 million visitors a year, second only to Multnomah Falls as a true tourism attraction.
- The Lodge and its 71 rooms are located midway on a chairlift system that ranges from 5,000 to 8,500 feet in elevation.
- The trail system totals 32 trails with its longest winter run reaching nearly 3 miles.
- “We’re a jump off point for all kinds of recreation in the summer,” Jon adds. “People come here to climb, to hike, to sightsee …”
- "But the lion's share of our visitors are just coming up to see the lodge."

By Dan Shryock
For Oregon.com