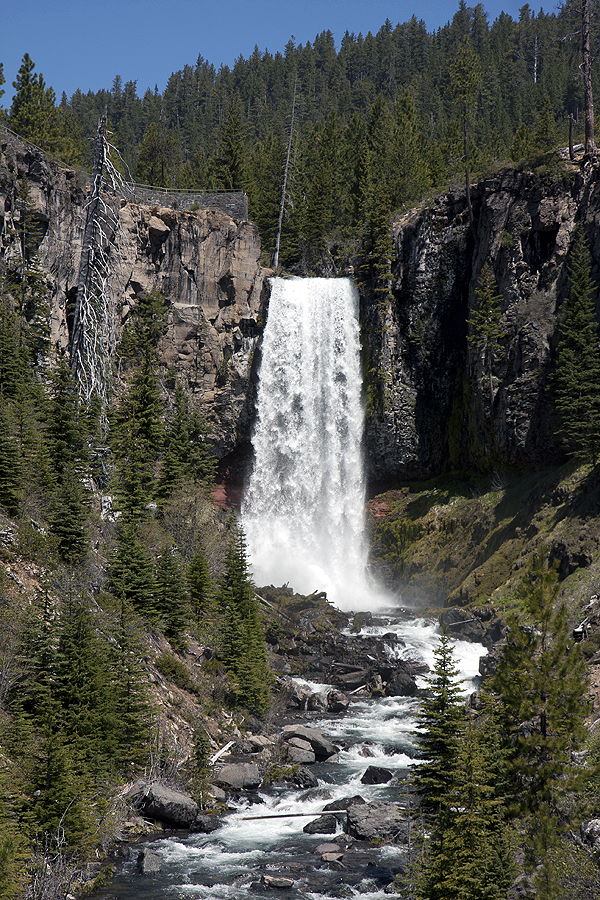 While the Multnomah Falls get nearly two million visitors a year, and are considered one of the top tourist attractions in Oregon, there are hundreds of other falls around the state that offer just as stunning views.

These falls, inside United States Department of Agriculture Forest Service lands, is around 20 miles from Bend and well worth the trip.

What I especially liked about the trip, is that as you got outside of Bend, and entered the forest, you really got to see the type of terrain and vegetation which surrounds the city. It was a great drive, not that difficult and relatively easy to find for those who are a little adventurous. I even got to see a number of ground squirrels, deer and hawks during the drive up, which with the mountains as a backdrop made it a very picturesque drive.

We visited the falls the first week of June, and while the snow level was low, we never ran into any snow on the road. If you want to avoid snow-driving to get to the falls, a mid-June through September season is pretty safe, according to locals. The road is closed during the winter months.

You do have to be warned, however, that the last section of road to the falls is about 3 miles of unpaved road, which can be pretty rough and wash-boarded. I was driving a minivan and never felt like I was going in any danger of getting stuck. Many different types of vehicles made the trip, from pickups to Priuses. If you are used to gravel country roads, you should be fine, but do make sure you have things in your vehicle secure, as it does get bumpy. In addition, the parking lot for the falls is quite small, so those wanting to take recreational vehicles to the falls may want to think twice.

The road up to the falls follows Tumalo Creek, and it’s a beautiful drive, if you aren’t in a hurry. When driving along the gravel road, make sure to keep your eyes peeled for different turnouts along the route, as there are great places to get pictures of the mountains, wildlife, the creek and some even offer informational kiosks about forest fires and how important the creek is to the environment.

One of the things I learned at one of the stops, was that in 1979 the Bridge Creek Fire destroyed the area and after salvage logging in 1980 the stream was damaged. Over the course of many years, local school children and naturalist have worked to repair the stream to bring back fish habitat. They have replanted more than 70,000 trees and shrubs to help stabilize the bank and provide wildlife habitat.

But the falls are the star of the show.

Once you reach the falls, you are rewarded with pretty much instant gratification. The viewpoint is literally feet from the gravel parking lot, up the hill. The viewpoint has guard rails and offers a great view from a few hundred yards from the bottom of the falls. I personally was amazed by the trees growing along the canyon walls and the cool patterns the roots made in the rocks.

Parking can be a challenge on weekend days, but if you visit during the week, it should be easier to find a spot. There are restrooms and kiosks with more information about the falls and how it is in the shadow of a mountain locals call “Broken Top.” The creek is fed from glacial melt, so during early-to-mid summer it is pretty impressive with faster flows going over the 89-foot drop off.

There is some question as to how high the falls are, with many resources calling it a 97-foot fall, but the Northwest Wafterall Survey measured it in 2010 and call it 89-feet tall. All I know, is that it was a stunning site.

There is also a well-groomed trail that will take you to the top of the falls, which also has a nice view. The trail continues on for four miles to a place called Happy Valley. I didn’t make that hike, however.

People in the area were fishing, hiking, biking and picnicking around the falls, so it’s a very nice day trip if you want to work off some of the beer and food that Bend is so well-known for. The hike to the top of the falls will take you 10 minutes, but it really depends on your pace. I would call it a moderate hike, but then again, I had a pretty good lunch in Bend and was weighted down with camera gear.

About Tumalo Falls:  A 89-foot waterfall on Tumalo Creek about 20 miles outside of Bend. The park at the base of the falls offers hiking trails, fishing, picnic areas and restrooms. Along the way to the falls are informational kiosks that make it a great trip if you want to learn about the ecology of creeks, forests and fish habitat.

What to bring: While Central Oregon does boast 300-sunny days a year, it’s always best to check the weather reports and dress appropriately, as this is an outdoor activity. You will also want to bring comfortable shoes if you are going to do any hiking – flip flops aren’t a good choice. As with any waterfall, camera gear is a must.

Tip: The 3-mile access road is pretty rough, so avoid taking RVs up to the fall as the parking and road would make it very challenging. Also, the parking lot near the falls is pretty small, so if you go either go during the week or early in the morning as to secure a parking spot. You can plan a full day of hiking and playing near the falls if you want, as there is plenty to do.

Getting there:  From Highway 97 in Bend, turn west on Franklin Street.  About a mile from Highway 97, turn right and cross the Deschutes River on Galveston Street. After passing Century Drive, Galveston turns into Skyliners Road. Follow Skyliners for approximately 10 ½ miles, and turn left on Forest Service Road 4601, which is clearly labeled for Tumalo Falls. FSR 4601 is a gravel road and about three miles to the base of the falls.