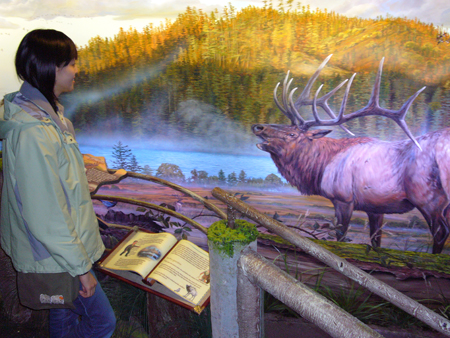 Started in 1993, the Umpqua Discovery Center is a partnership between the city of Reedsport and volunteers to make an interactive museum that teaches people about the history of the area and the natural beauty surrounding Reedsport along the Oregon Coast.

It was a summer day and laughter filled the bear exhibit at the Umpqua Discovery Center, proving once again this isn’t your normal museum.

Two little girls were running through the underbrush, then sliding into the bear den, petting one of the bear pelts and then doing it again, racing, laughing and thoroughly enjoying themselves.
There wasn’t a “when are we leaving” asked once.
For young and old alike, the Umpqua Discovery Center captivates visitors with a variety of attractions. If you want to learn about the natural history of the area around Reedsport, simply walk into the Pathways to Discovery exhibit.
The exhibit, which is broke up into seasons and different regions, simulates walking on a path, including simulating the soft path covered with pine needles. Each area has a huge mural painted by local artist Peggy O’Neal to represent the season and region you visit. In addition, with the help of the Oregon Museum of Science and Industry, there is also an interactive bear exhibit, where visitors can learn about the woodland creatures.
What I learned during my visit is that bears are mostly vegetarians, but do eat other animals like fish, insects, and to my relief I didn’t see humans on the list.
“People come in here and can learn about the area, or about the history,” said Diane Novak, Director of the Discovery Center.
But natural history is only one part of the discovery center. 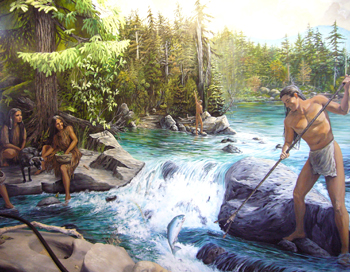 The first exhibit built for the center was called ‘Tidewaters & Time’ and features the history of the area, from the 6,880 years ago when the Kuuich tribe inhabited the coastal areas to the budding fishing and timber industries and development of the coastal cities.
One of the most powerful exhibits for history buffs, are movies of people who lived through the early settling from retired loggers who used hand saws to audio stories of what life was like living on the coast from people who were actually there.
“We are very fortunate to have preserved these stories,”Novak said. “People really enjoy seeing the videos and learning about what life was like back then.”
The discovery center also has a theater, which plays about 30 movies, which is in addition to the “subterranean theater” in the natural history section, which looks like a bat cave and features movies on animals ranging from elk to, of course, bats.
The discovery center gets about 20,000 visitors a year, and when you visit, make sure to visit the gift shop. In the middle of the gift shop is a 35-foot periscope, that has 360-degree views of the area. The two exhibits are static, meaning there are not plans to change them, and if you take in all of the movies, audio stories, read the books and press the interactive displays, expect to take at least two hours to see everything.
Tours of the discovery center are mostly self-guided, but for groups staff members will give tours if you call ahead. 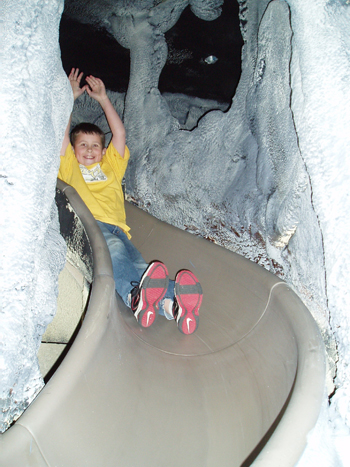 About the Umpqua Discovery Center: Started in 1993, the Umpqua Discovery Center is a partnership between the city of Reedsport and volunteers to make an interactive museum that teaches people about the history of the area and the natural beauty surrounding Reedsport along the Oregon Coast.
What to bring: While there are places to stop and sit, a comfortable pair of shoes helps you walk through the museum. Photography is not allowed, so leave the camera turned off. The exhibits are all American with Disability Act accessible.
Tip: Throughout the Pathways to Discovery exhibit there are 18 different species of trees. A few replicas of the Oregon trees have small drawers and they are pretty easy to miss. Each of these drawers has information about the tree and is very informative.
Season: The Umpqua Discovery Center is open year round, with extended hours during the summer months. For specific hours and admission prices visit their web site at www.umpquadiscoverycenter.com.
Getting there: The Umpqua Discovery Center is located near old town Reedsport off Highway 101 & 38. Signs to the center are clearly marked in Reedsport, at the north end of town. For the GPS crowd, it is located at 409 Riverfront Way, Reedsport.
Story by Patrick Johnson, a free-lance writer based in Canby, OR.
By Patrick Johnson
For Oregon.com