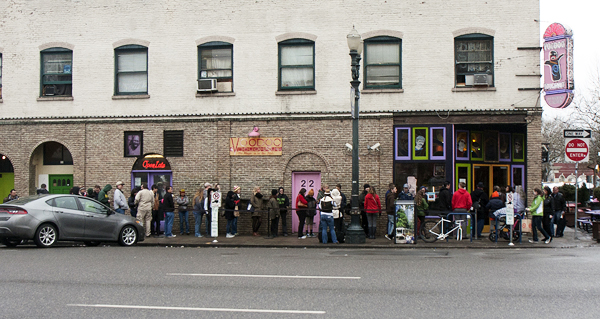 Jim and Stephanie Rose stood outside in the rain, with a large pink box waving it around like they had won the lottery.

This isn’t an unfamiliar site in the Old Town District of Portland, where one of stalwarts of Portland tourism sits – Voodoo Doughnuts.

Known for its edgy doughnuts, voodoo magic theme, and lines that can sometimes circle the block, Voodoo is the quintessential Portland business. Heck, they are even across the street from the iconic “Keep Portland Weird” mural.

While the rain wasn’t putting a damper on the Rose’s successful trip to Voodoo, they were touting just how good the doughnuts were.

“We are from California and heard about this place and had to visit,” Jim Rose said. “We were here last night and loved it so much we came again this morning. We had to wait a bit longer this morning, but it was worth it.”

The doughnut shop started in 2003 when two friends decided to go into business together.

“After the epiphany that there was not a single doughnut shop downtown, we embarked on that project,” said Kenneth “Cat Daddy” Pogson, one of the co-owners. “Voodoo opened in May of 2003 and it has been a wild rocket ride since. Our first press was within a few weeks and it has kept growing since.”

Now the duo have four doughnut shops around the west, with two in Portland, one in Eugene, Oregon and a fourth store which opened in 2013 in Denver, Colorado, which is called Voodoo Doughnuts Mile High. They also say they are scouting for a fifth location. Pogson said his shops have had “millions of customers” over the course of the years.

“Our number one doughnut is the Bacon Maple Bar, followed by the signature Voodoo Doughnut, then the Old Dirty Bastard,” he said.

The Bacon Maple Bar is basically your traditional maple bar with bacon on top, and it’s decadent. The Voodoo Doughnut is filled with raspberry jelly topped with chocolate frosting and a pretzel stake and is in the shape of a voodoo doll. The Old Dirty Bastard is a round doughnut with chocolate frosting, Oreo’s and peanut butter.

One of the other signature doughnuts is the Tex-Ass Challenge, which is a huge round doughnut and if you can eat it – it is equivalent of six regular doughnuts – in 80 seconds, you get your money back. The shops also hold monthly eating contests.

If there is such a thing as an “edgy” doughnut shop, Voodoo would be it, and judging from the lines, people love it.

“We heard about it and were curious, but now we are going to tell all our friends about it. It’s a great place and they are good doughnuts too,” Stephanie Rose said. “We love it.”

But Pogson isn’t done with donuts, there are also three beers through Oregon-based Rogue Brewing, a bacon maple ale, chocolate banana peanut butter ale and chocolate raspberry pretzel ale. They also have a record label where they release doughnut-related songs on 45s only.

About Voodoo Doughnuts:  With three Oregon locations, two in Portland and one in Eugene, this is the edgy place to get the favorite breakfast food. With different doughnuts offered, it’s the go-to place for people who want to have the Oregon experience.

What to bring: Comfortable shoes and cash. The shops don’t take credit cards, so make sure to bring cash, and if you end up standing in line, make sure you are prepared for Oregon weather.

Tip: The shops are open 24-hours a day, so if you don’t want to wait in line, show up either very early in the morning or during weekday afternoons. Weekends, summer and spring are very busy times.

Season:  The store is open year-round.

Getting there:  The first store is located at 22 SW 3rd Avenue in Portland, near Chinatown. The second store is at 1501 N.E. Davis Street, Portland, and the third location is 20 East Broadway at Willamette Avenue in Euguene.