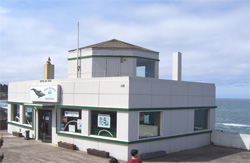 It's a phrase you will hear over and over when you visit the Whale Watching Spoken Here Interpretive Center in Depoe Bay on Highway 101 right before the Depoe Bay Bridge.

The center, which sits out from the sea wall at Depoe Bay, is a state-run facility that is designed to teach people about the many different types of whales that pass by the Oregon coast.

"There are more than 1,100 humpback whales and 1,800 grey whales that cruise past this spot during the winter, spring and summer," said Morris Grover, volunteer coordinator and team leader for the center. "We try to educate people about the whales and help them spot whales from the observation deck."

When you walk into the center, the first thing that catches your eye is a dry-erase board that has the number of whales spotted that day, week and month. As people spot whales, the number is updated. The day I visited the center, three whales had been spotted when I walked in and the number grew to seven during my visit.

"It's a way to have people involved in what we do here," Grover said. "They spot a whale and we update the numbers. It's great for kids and adults."

The center is loaded with history, books, artifacts and even bones of whales. There is also a short video people can watch. To help offset some of the costs of the center, apparel and other tourist items like stuffed animals are sold at the center. But most of the space is used to educate the public about whales and watching them on the Oregon coast.

Visitors can spend time learning about the huge creatures or looking west into the Pacific Ocean to try to catch a glimpse of a spout, spyhop or breach.

Here are some of the more common terms that are used when whale watching:

Spout or blow: The blow or spout shoots nearly 12 feet high and expels 400 liters of air in a single blast. Gray whales, for example, usually surface every 45 seconds as they swim, but will often stay under for three to five minutes when they are eating. If they are frightened they can stay down for 30 minutes.

Dive: This is when you will see a tail come out of the water. It's also called a sounding or fluking and it happens when a whale lifts its tail flukes out of the water. This helps the whale propel downward at a steep angle to the bottom, where they feed on small crustaceans.

Spyhop: A spyhop is when a whale lifts its head out of the water to look around. Researchers believe they do this to get a better understanding of their surroundings. Grover said that it's their way of saying "hello."

Breach: When a whale launches its body into the air and slams the water with a thundering crash - it's called a breach. "I think they are yelling 'CANNONBALL!' when they do that," Grover said. "It's a spectacular thing to see, and we have seen many of those here."

You don't have to rent a whale watching boat or have a powerful telescope to see the whales display the listed behaviors; you just have to visit the center in Depoe Bay, or one of 28 other sites along the Oregon coast during the whale watching events.

The center is by far the best set up for visitors who want to see whales, but don't have a good pair of binoculars. The west side of the building faces the sea and is lined with huge windows with a dozen set of binoculars. People are encouraged to look out into the ocean to look for whales and there are at least two volunteers or park rangers on staff to help you spot the huge mammals. It's a good time being out of the weather and having the helpful experts on hand to point out whales passing through.

"It just depends on when they come by," Grover said. "We have whales all year long, the numbers just increase or decrease depending on when they are migrating."

What to bring: Whale Watching Spoken Here Interpretive Center in Depoe Bay is an enclosed building, but if you want to brave the sea wall during the winter and spring months be prepared for Oregon coast weather - wet and windy. If you want to stay indoors, everything is provided, just make sure to bring some comfortable shoes if you are going to be spending a lot of time looking for whales.

Season: Whales can be spotted on the Oregon coast almost every day, but the following are the best times to spot the mammoth mammals:
Winter: December 26 through Jan. 2
Spring: March 25 through April 1
Summer: August 28 through Sept. 4

Tips: If you have time and binoculars, also visit one of the state parks where you can view whales. During the designated whale watching weeks volunteers are stationed at the parks to help you spot the migrating behemoths.

Grover also said that many of the local Depoe Bay charter captains are happy to take groups out to whale watch - for as little as $15 for a short trip. At the center they have a list of local charter companies that feature whale watching trips.