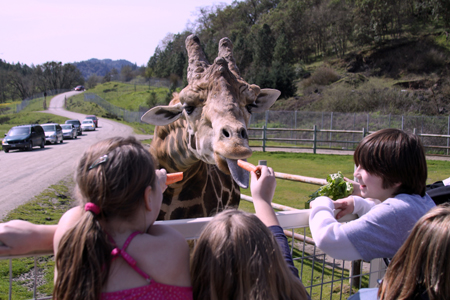 Five year old Hayley Barker was tentative while she scratched the head of the camel.

This wasn’t like any other type of zoo the little girl had been to, as she had just finished a 20 minute ride on the back of the dromedary and now was saying thank you to the beast which towered over her.
“It’s OK, he likes that,” the trainer said as Barker continued her affections.

Those are the type of experiences you get in Winston Oregon at the Wildlife Safari.

Ever been within feet of an American alligator? How about within spitting distance of a flock of pink flamingos? The fence and shrubs are the only thing keeping you from the business end of a porcupine, and these experiences are just in the Village area – the real experience is when you drive your car through the park.

You know a tourist attraction is good, if all the locals have stories about their experiences in Winston.
“A lot of people don’t realize what is in the Village and there are a lot of experiences here that people miss out on,” said Destiny Molatore, development director of the wildlife park.

The free Safari Village features more than 90 animals, a petting zoo, gardens, a gift shop, café and event center. In addition, there is also a train that people can take where the engineer gives a guided tour around some of the park – things people miss if they don’t take the time to get out of their cars.

The most popular aspect of Wildlife Safari is driving through the wildlife park and seeing a lot of the 600 acres and more than 550 animals in the wild. The 4.5 mile drive takes about 90 minutes, but can take up to two hours depending on the number of cars going through and their speed. Molatore said that many of the animals are fed near the road, so getting a glimpse of everything from rhinos to lions is possible.

People can drive through exhibits that showcase wildlife from Africa, Asia and America and about 160,000 people a year visit the park.

“But we are more than just a roadside animal show,” Molatore said. “We are actually accredited as a zoological park through the Association of Zoos and Aquariums.”

In fact the Wildlife Safari is in the top 10 percent of the zoos and aquariums in the nation with the accreditation.

That was the original vision of Wildlife Safari, when Frank Hart created the facility 38 years ago he wanted to help save rare and endangered species from around the world.

Molatore was quick to point to the park’s cheetah breeding program, which is one of the most successful in the United States.

“We have had 161 cheetahs born in captivity here,” she said. “It is very hard to breed cheetahs in captivity and we have been able to do it, and are showing other facilities how we do it.”

Education is another piece of Wildlife Safari that makes it a special place. It’s one thing to read about animals in a book, but it’s quite another to be able to learn about training elephants, feeding giraffe, or encountering a big bear.

“There are a number of programs that allow people to have close encounters with the animals,” Molatore said. “We have activities and tours throughout the day during the summer months – when we are the busiest.”

What to bring: Make sure your camera is charged and you have plenty of space on the memory card. Almost everywhere you look is a picturesque setting with one type of animal or another. In addition, if you take time to visit the Safari Villiage, make sure you dress appropriately for the weather. Oregon is notoriously unpredictable, and the Village is all out doors.

Tip: One of the best times to visit Wildlife Safari is during the winter months, Molatore said. The cooler temperatures make the animals more active, and during the winter the crowds aren’t as big, giving you more time to see the park.

Getting there: Typing 1790 Safari Road, Winston, Oregon into your GPS should get you to the entry of the park – however some units get confused once you enter the park, so follow the signs. From Interstate 5 (N or S) take Exit 119 west toward Winston. Follow Highway 42/99 approximately 2 miles, turn right on Lookingglass Road and follow the signs on the right.