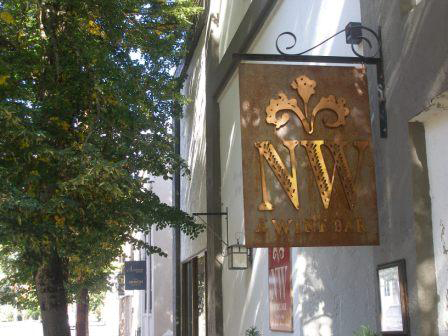 WINERIES, HAZELNUTS AND AN AIRPLANE THAT DOUBLES AS A WATER SLIDE: A YAMHILL VALLEY PRIMER

By Jim Gullo, for Oregon.com

You don’t so much drive into the Yamhill Valley as you drop into it, down steep Rex Hill outside of Newberg, Oregon on Route 99W.  There you shake off the remaining webs cast by Portland and its suburbs – Tigard, Tualatin and Sherwood – because by the time you hit Newberg, about thirty miles south of Portland proper, you’ve essentially crossed past the perimeter of a comfortable commute to the city and entered one of Oregon’s most delightful semi-rural areas.

Suddenly, as the traffic lightens up, the valley created by the Yamhill River announces its simple pleasures: The hillsides outside of Newburg are shared equally by a lovely patchwork of vineyards, livestock and food crops.  There is a little roadside stand selling home-grown hazelnuts at the bottom of the hill.  And Newberg itself is the first of a series of utterly charming towns that have managed to create and capture a lifestyle that is awfully attractive to any number of people seeking simpler lives punctuated by good food, good wine and utterly bucolic views of rural life.

There are gems hidden everywhere as you explore the towns and backroads of Yamhill County.   Newberg’s main drag, where you’ll find everyone from retirees to students of local George Fox University, has an excellent bookstore that doubles as a coffee shop, wine bars and tasting rooms like the trendy Hip Chicks Do Wine, the old Cameo movie theater and several restaurants.  On a hillside on the outskirts of town sits the new, ritzy Allison Inn & Spa, a multi-million dollar lodging that opened in the fall of 2009 (see related story).

Continue south on 99W a few miles to arrive in Dundee, the epicenter of Willamette Valley winemaking, an industry that has grown over the last decade to encompass some 450 wineries, nearly half of which are located in this strip of fertile valley between Newberg and Eugene, an hour and a half’s drive to the south.  In Dundee you’ll find plenty of tasting rooms and wineries like Wine by Joe and the Argyle winery, which was established back in 1987 when this area was far better known for its logging and Christmas trees than it was for its wine grapes.  Now, the hills outside of Dundee are planted with some of the best pinot noir grapes in the world, and wineries compete to bottle not only the best fine wines, but provide memorable tasting room experiences for visitors who drive down from Portland to taste and buy direct.  To that end, Ponzi Vineyards has a tasting room in the heart of Dundee, with the elegant Dundee Bistro attached for fine-dining.  On the southern edge of town, the new Farm to Fresh deli and bistro shares a new building with the Inn at Red Hills; it’s a good place to provision oneself with bread, cheese and salads for a trip into the backcountry. 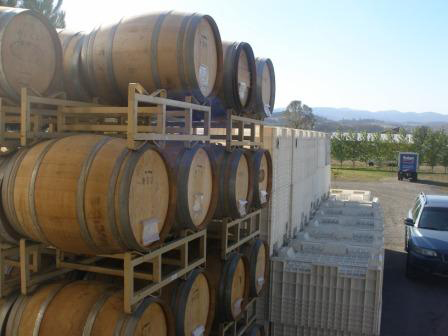 Outside of Dundee are the Sokol Blosser winery, with a convivial tasting room perched on a hill, and then the gorgeous triumvirate of DePonte Cellars, the Domaine Drouhin Oregon estate winery and Domaine Serene, all of which produce some of the most highly rated wines in the valley.  DDO in particular, which was built and planted by the Drouhin family of winemakers from Burgundy, has sweeping views on a clear day of the valley and Cascades mountains that are the equal of their sensational pinot noir and chardonnay wines.  The groves of evenly spaced trees that you pass are probably hazelnuts – the county has over a million of them, and is one of the top producers in the world – and in the fall the ground is covered with ripe nuts that are swept up by machines and often sold directly from roadside markets.

Cut over to Highway 18 to enter the thriving town of McMinnville, which in itself is loaded with attractions.  On the right you can’t miss the Evergreen Aviation & Space Museum, with one of the finest collections of vintage aircraft, military vehicles and rockets outside of the Smithsonian.  The museum was originally built to house the Spruce Goose, Howard Hughes’s legendary enormous airplane, which is still on display in the main building.  Out front is parked a 747 aircraft that one day will be the centerpiece of a watery amusement park, with slides emerging from its doors into pools.  Locals bring their lawn chairs to the museum’s parking lot at dusk on the 4th of July to enjoy a big fireworks show in a neighboring field.

McMinnville’s Third Street bills itself as “Oregon’s Favorite Main Street,” and it’s easy to see why.  Historic brick buildings dating back to the turn of the 20th century are still lively and crammed with shops, boutiques, wine bars, an organic grocery, and some of the finest restaurants outside of Portland.  On Third Street alone are the iconic Nick’s Italian Café (see related story), Bistro Maison, La Rambla, Thistle and, at the end of the block, the Golden Valley Brewery & Restaurant, which not only makes its own beer in-house but grows its own beef for first-rate hamburgers and steaks at a ranch outside of town.  From May through October, the McMinnville Farmers Market is a popular Thursday afternoon gathering place to buy fresh produce from area producers, the same day that a brown-bag concert series in the summer brings live music to the U.S. Bank Plaza.

From here, the coast beckons, an hour’s drive to the west, or more wineries await for tasting and shopping in the tiny towns of Carlton, Amity and the Eola Hills on the outskirts of Salem.  People have been beating their paths to this area ever since it was the ending point of the Oregon Trail in pioneer days; it’s easy to see why the Yamhill Valley still holds a magical pull on its residents and visitors alike.