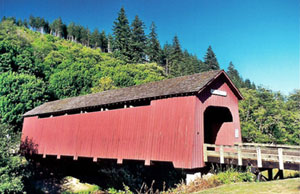 Location:
From Interstate 5, take the Corvallis exit (228) west 38 miles through Philomath on US 20. The bridge adjoins Highway 20 near milepost 17. Alternately, travel east from Newport on Highway 20, 17 miles to Chitwood.

Background:
Not much activity occurs at Chitwood anymore. The Chitwood Bridge was once surrounded by several stores, a post office, a telephone office, and several houses. The boarded up remains of the Smith store nearby is a dim reminder of the vitality the community once had.

Logging in the area once boomed enough to support not only the stores, but also contributed to rowdy times in the Chitwood Dance Hall.

In the early 1900s Chitwood became an important rail stop for the steam locomotives from Yaquina to Corvallis, as the town was where the engines took on water and fuel, as well as passengers and freight.

The rails near the bridge are still used, but the train no longer stops at Chitwood. In 1982, Lincoln County officials announced that the bridge had been seriously damaged and would ether be replaced or repaired. A public hearing concerning the future of the bridge influenced the commissioners to completely rehabilitate the structure.

Following environmental studies and engineering reports, a contract was awarded the following year to Aubrey Mountain Construction for the rehabilitation work. Supervision was provided by John Gilliland, who had helped build the covered Belknap Bridge in Lane County in 1966.

By December 1983, work had been completed on the roofing, flooring, siding and approaches, costing in excess of $240,000. Dedication ceremonies in January 1986 included a recitation of history of the area and a parade of vintage cars.