Angling on the North Umpqua River 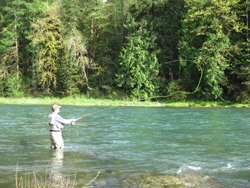 Southern Oregon is known for its open space, wild natural beauty and is blessed with numerous lakes, rivers and the Pacific Ocean. All this water presents plenty of fishing opportunities and one of the most sought after experiences is the pursuit of the summer steelhead on the fly.

East of Roseburg, following the North Umpqua River through its twists and turns of placid pools, juxtaposed with sections of rapid currents, you will enter into 31 miles of fly-fishing only territory. Many consider this river one of the most beautiful and most difficult places in the world to catch these incredible fish.

Steelhead, a type of rainbow trout, return to their original fresh water hatching ground to spawn after descending the river to the ocean, where they stay at sea for one to four years. Unlike some types of fish, steelhead do not die after spawning, and make this journey up to four seasons.

The river and its famed heavy runs of summer steelhead first found recognition when writer and sports angler Major Lawrence Mott, dubbed the millionaire reporter, established a fishing camp in the area in 1929. In 1931, the area garnered more attention when one of the most famous western novelists of the time, Zane Grey set up camp and began fishing the waters.

Today, many of the area campgrounds, bridges and fishing pools are named after or in honor of these two men who helped put this world famous fishing spot on the map.
The North Umpqua offers the longest summer steelhead season of any river in the world—running from June until mid November. Located in the middle of this stretch of premier fishing is the Steamboat Inn. Dating back to 1935 the resort originally consisted of several tents, a dining room and kitchen. Today the Inn is more than a place to rest your head after a day of fishing, it is a destination in itself.

On a recent visit to the rustic and quaint Steamboat Inn I was fortunate to spend time with one of the area’s premier fishing guides, Tony Wratney of the Summer Run guide service. Before I knew it, Wratney had me, a novice fly fisherwoman, geared up in wader pants and boots, in possession of my first daily angling license and standing in the middle of the North Umpqua. Part of what makes this river challenging is merely making your way into the water. The combination of an extremely slippery rock bottom, a fast and strong current as well as navigating depth, makes each step tricky. It’s no wonder it is considered home to some of the most challenging steelhead angling and why even experienced fisherman opt to hire a guide.

Once thigh deep at Boat Pool and with secure foot placement it was time for the cast.Wratney handed me a Spey two handed rod and taught me the Snap T cast off my left side.After a few misfires I found my rhythm. With each new cast, I let out a bit more line and moved downstream a step or two. I quickly understood theappeal. The motion, movement and repetition were meditative, relaxing and a bit addictive.

While still in my tranquil state of mind, Wratney announced it was time to move up to the more difficult Upper Boat Pool. Here I was more the observer, watching him show me a variety of casts.

Next we were off, driving down the road about 10 miles to Susan Creek. A bit of a hike down a trail, through brush, in and out of the water brought us to a small coved section where we waded out and I began to learn and work on the Double Spey cast off the right side.

The average North Umpqua steelhead weighs eight pounds, with an occasional fifteen pounder and all fish are meant to be released. During my fly fishing lesson, I didn’t catch a steelhead, although Wratney did let me reel his in.

While, I elected to fish for a few hours in the afternoon, a typical fly fishing experience starts at daybreak in search of the ideal location and most likely ends near the dinner hour.
Steamboat Inn“The goal is to try and pick one of the best pools early in the morning and hope you are the first one there” explains Wratney. He also says that etiquette on this river is a serious matter and because many of the pools tend to be small, if a car is parked near a fishing spot, the rule is to keep driving and not stop.

After a full day on the river, back to the Steamboat Inn, and what could be better than a massage to soothe tired muscles? In the busy summer season the inn offers this service in a river front cabin. Then, holding true to tradition and the early days of the inn, a fisherman’s dinner is served every evening in their dining room. With their large group tables, it’s the perfect place meet fellow anglers, trade fishing tips and tricks of the trade.

All photos provided by Alexa Meisler