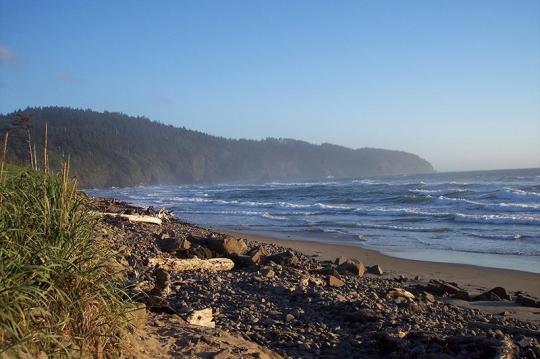 Here's a dramatic whale-watching headland jutting into the Pacific Ocean. 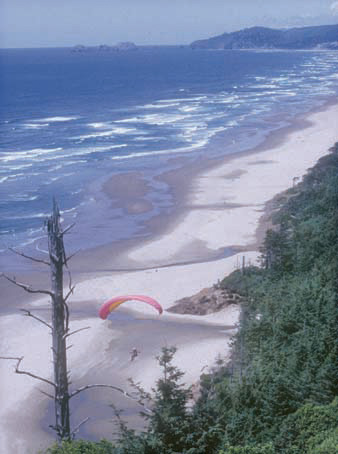 About the Hike: Like an unfinished dike to Hawaii, this narrow, cliff-edged cape juts 2 miles straight out into the Pacific Ocean. At the trailhead atop the cape, hikers have three choices: walk out to the viewpoint at the cape's tip, descend to a secluded beach at the southern base of the cape or amble north along the bluffs to the state park's popular picnic area and campground. The trails have muddy spots unsuitable for tennis shoes.

Difficulty: The hike to the cape's tip is a moderate 4.8-mile trip with 400 feet of elevation gain.

Getting There: From downtown Tillamook, head west on Third Street and follow signs for Cape Lookout State Park for 13 miles. Continue past the campground turnoff 2.6 miles to the signed trailhead turnoff on the right. (If you're driving here from the south, take the Pacific City exit of Highway 101 and follow the Three Capes Loop 16 miles north to the top of a pass and the trailhead sign.)

Hiking Tips: To hike to the tip of the cape, take the left-hand trail at the end of the parking lot and keep straight at a junction 100 yards beyond. The dense forest of gnarled old spruce and hemlock trees shelters ferns, salal, salmonberry and candyflower, an edible little 5-petaled white bloom with delicate pink stripes. 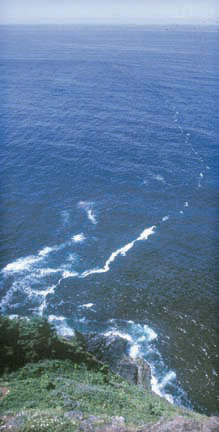 The first view south, after 0.6 mile, is just above the site where a B-17 bomber crashed into the cape's 800-foot cliffs on a foggy day in 1943. If the weather is clear, you can spot Haystack Rock off Cape Kiwanda, as well as Cascade Head and distant Cape Foulweather.

Another 0.6 mile brings you to a railed overlook with your first view north. Note Three Arch Rocks off Cape Meares and the blue silhouette of Neahkahnie Mountain. Next the trail detours above a cove where the old path once slid into the sea. A boardwalk helps hikers cross mudpits on the new route.

At the tip of the cape, red paintbrush, white yarrow and scarlet fireweed brighten a clifftop meadow 400 feet above the waves. A red buoy moans offshore. Bring binoculars to watch for gray whales here from December to June. Up to 20,000 whales migrate from Alaska to Mexico each year. Sometimes as many as 30 per hour round this prominent cape. Remember to save some energy for the return hike uphill to the trailhead.

If you'd rather try a less heavily used path from this trailhead, take the Oregon Coast Trail either south or north. To the south the path switchbacks 1.8 miles down to a beach that stretches to the Forest Service campground at Sand Lake. The first 2 miles of this beach are quiet, but the last 2 miles are open to cars.

To the north of Cape Lookout, the Oregon Coast Trail descends gradually through an old-growth spruce forest with views of Sphinx Island, to the picnic grounds at the state park's day-use parking area. For an easy hike, leave a shuttle car here (a parking fee is charged) and hike this 2.3-mile trail all downhill.

For a more difficult trek from the campground, walk the beach 4.9 miles to the tip of Netarts Spit, where seals and shorebirds often hang out. The spit has views of Netarts, Oceanside and Three Arch Rocks. It's not easy to return on a loop because the muddy shores of Netarts Bay are largely unhikable.

History: During World War II, a B-17 bomber was flying north along the Oregon Coast on a transit run. On that day in 1943 Cape Lookout was shrouded with fog. The pilots mistook the cape for a cloudbank and flew straight into its 800-foot cliffs. There were no survivors. Although the trail passes just above the crash site, the wreckage is no longer visible.

Geology: Cape Lookout's basalt dates back 15 million years, when lava flows from Eastern Oregon poured down the Columbia River and fanned out into the ocean. All along the northern Oregon Coast, tough remnants of these massive basalt floods have survived to form headlands and islands. 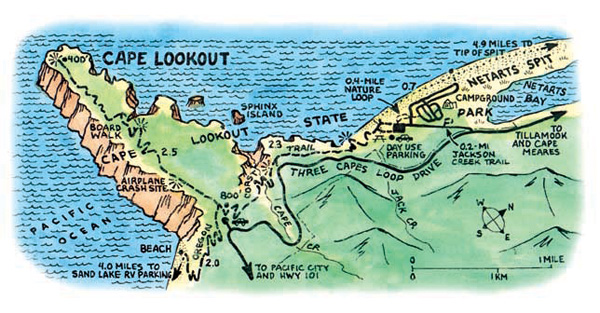 Cape Lookout State Park can be reached by traveling an hour and a half west of Portland through the scenic Wilson River pass. Along the way stop and enjoy waterfalls, scenic views and some great fishing.