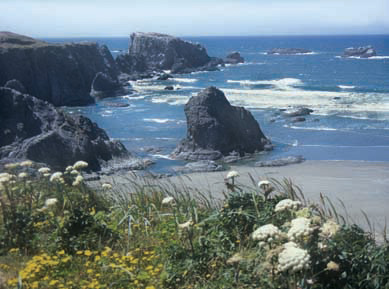 Start in Old Town Bandon and enjoy an easy, scenic stroll along a beautful stretch of South Coast.

About the Hike: Begin in Bandon's Old Town, follow the beach past craggy islands in the surf, and then return along city streets atop the seashore cliffs.

Difficulty: An easy, 3.3-mile loop with just 100 feet of elevation gain leads from the old town to Coquille Point and back.

Getting There: Start on Highway 101, south of Coos Bay 25 miles. Turn off Highway 101 through an archway proclaiming "Welcome to Old Town Bandon," drive a block to the riverfront, and turn left a block to a big parking area beside the boat basin.

Hiking Tips: First explore Old Town a bit by strolling around the three main blocks of gift shops, boutiques, and galleries. Then set off toward the ocean, following First Street along the riverfront. This street curves left at white clapboard building built by the Coast Guard in 1939.

Shortly afterward turn right on Jetty Road, a narrow street that once was the town's boardwalk to the beach. Because Jetty Road has no sidewalk, it can be more pleasant to climb over some boulders to the right (after the Lighthouse Bed & Breakfast) and follow the river beach most of the way to Jetty Road's end at the South Jetty.

From the jetty, turn left along the ocean beach. To sea, Table Rock's flat top swarms with seagulls, cormorants, and murres. Bring binoculars to spot the red-beaked puffins that arrive in April. They nest in tunnels up to 30 feet long that they dig in the sides of the island's dirt top. To protect easily frightened seabirds, climbing and tidepooling are banned on all Bandon's islands and sea stacks-even those easily accessible at low tide.

After a mile on the beach you'll cross a sandy gap between Coquille Point and Elephant Rock, a huge island shaped like a big-eared elephant with sea caves for eyes. For the short loop, climb a staircase on the far side of Coquille Point to Beach Loop Drive and follow this street left 1 mile, ignoring the street's frequent name changes. Finally turn left on Edison Street to return to your car.

For longer loops, however, continue 0.9 mile along the beach to a collection of weird, pointy sea stacks at the tip of Grave Point. The cluster of small islands visible from here are Cat and Kittens Rocks. Face Rock is the large island resembling an uplifted face.

For a moderate loop hike, climb a staircase just beyond Grave Point to the picnic area at Face Rock Wayside, and from there follow Beach Loop Road left to Old Town as described above. For a longer loop hike, however, continue 1.9 miles farther along the beach to the Devils Kitchen, a sandy cove sheltered from the wind by a cliff. Walk inland to the back of the cove, cross a creek on a log, and go left up a trail into the trees to a picnic area. Then walk out to Beach Loop Drive and turn left along it 3.9 miles to Old Town.

History: The South Jetty was built in 1906 to stem a rash of shipwrecks on the Coquille River bar. When the Oliver Olson rammed the jetty so hard in 1953 that the ship couldn't be pulled free, the South Jetty was extended by building right over the ship's hull. Now sailors complain the uneven lengths of the river's two jetties make the bar more treacherous than ever.

According to a Coquille tribal legend, the face in Face Rock belongs to Ewauna, daughter of Chief Siskiyou, who had traveled here to a great potlatch feast in his honor. Ewauna had never seen the ocean before, so one night she sneaked to the beach for a moonlight swim. In the water she was grabbed by the evil ocean spirit Seatka. But she refused to look into his eyes, knowing that this was how he controlled his victims. Instead she fixed her stare on the North Star, and defiantly gazes there even today.

Geology: The Southern Oregon Coast is composed of rock that began a billion years ago as a volcanic island archipelago in the Pacific Ocean. The drifting of the continents has since "rafted" these ancient islands and reefs onto the Oregon shore. Many of the islands at Bandon are composed of blueschist, an extremely resilient rock prized for jetty construction.