One of the prettiest viewpoints in Crater Lake National Park

About the Hike: Starting from the historic Crater Lake Lodge, this path climbs along the rim of a gigantic collapsed volcano, now filled with a stunningly blue, 6-mile-wide lake.

Difficulty: The moderate 1.5-mile-long trail to the peak gains 970 feet of elevation.

Season: Open mid-July through October. The route may cross a patch of snow or two in July. Wildflowers are profuse along parts of the trail in August. Snowstorms generally close the route in November.

Getting There: From Medford or Klamath Falls, follow "Crater Lake" signs on Highway 62 to the park turnoff. Turn north and continue seven miles to Rim Village, and turn right through this beehive of tourists for 0.3 mile to a turnaround at Crater Lake Lodge.

If you're coming from Bend, drive Highway 97 south 76 miles to Diamond Lake Junction, turn right on Highway 138 for 15 miles to Crater Lake's north entrance road, turn left on this route 9 miles and turn right on the lake's Rim Drive 9 miles to Rim Village. This northern access route is closed by snow from November through June.

Fees: Expect to pay $10 per car for a day pass or $25 for an annual pass at a fee booth at the national park entrance.

Hiking Tips: Walk behind Crater Lake Lodge and turn right on a paved pathway along the lake rim. Pavement soon yields to a broad trail through meadows where blue lupine, bright orange paintbrush, yellow groundsel and purple fleabane bloom in summer. Views improve with each switchback. Snow patches linger across the trail until August near the top. At this elevation, only gnarled 5-needle whitebark pines survive. These trees' limber limbs, so flexible they can be tied in knots, help the pines bend rather than break in winter gales.

When you reach the peak's summit, the glowing blue of Crater Lake gapes below like a quarter-mile-deep pool from a high-dive tower. If you're quiet you might see foot-long marmots and guinea-pig-sized pikas watching from cliff-edge rocks 100 feet north of the summit. To the east, Mt. Scoot looms above Phantom Ship's small craggy island. To the south stretch the distant flats of Klamath Lake, with the tip of Mt. Shasta and the cone of Mt. McLoughlin on the right. 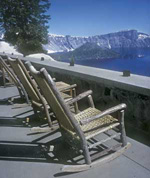 History: The grand-looking Crater Lake Lodge at the trailhead wasn't always grand. Built from 1909-1915 at a cost of just $50,000, the building originally opened with tarpaper on its outside walls and flimsy beaverboard between rooms. Years of makeshift maintenance and harsh winters left the building slated for demolition in the 1980s. A public outcry pushed the Park Service to renovate it instead. After a $35 million makeover, the lodge reopened in 1995 with elegant woodwork in the Great Hall, a modern bath in each guestroom, and its rustic ambiance remarkably intact. Rooms at the lodge run $123-$238 and require reservations months in advance. Call 541-830-8700 for information.

Garfield Peak was named for the Interior Secretary of President Teddy Roosevelt, who created the national park in 1902.

Geology: Crater Lake fills the caldera of Mount Mazama, a volcano that collapsed after a cataclysmic eruptions about 5,700 BC. The mountain first began to form 500,000 years ago. At its height, Mount Mazama was a broad, 12,000-foot mountain the size of Mount Adamas. Ice Age glaciers gouged its flanks with valleys.

Then, in an eruption 150 times as massavie as the 1980 Mt. St. Helens blast, Mount Mazama suddenly exploded 14 cubic miles of pumice and ash into the sky, leaving a gaping 6-mile-wide caldera. Later, two cinder cones erupted on the caldera floor. Wizard Island's cone still rises 764 feet above the lake, but Merriam Cone was submerged as the caldera filled with rain and snowmelt. The deepest lake in the United States, Crater Lake has no outlet but maintains its level by evaporation and seepage. The lake's 1,943-foot depth and remarkable purity account for its stunning blue color.