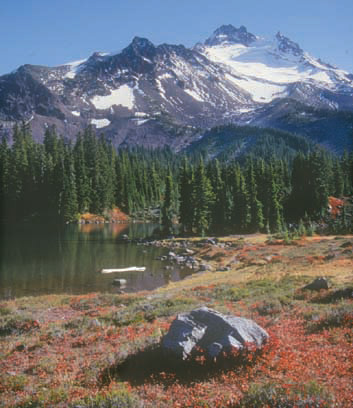 This climb to the meadows beneath Mt. Jefferson is tough, but the views make the effort worthwhile.

About the Hike: Oregon's second tallest mountain rises like a wall from the lake-dotted wildflower meadows of Jefferson Park. The view of Mount Jefferson is so impressive and the meadows are so delightful to explore that the area is crowded in summer - so why not wait to go until September?

Difficulty: The hike is a difficult 10.2-mile round trip, gaining 1,800 feet of elevation.

Getting There: From exit 253 of Interstate 5 in Salem, drive 61 miles east on North Santiam Highway 22. Between mileposts 60 and 61 (10 miles beyond Detroit), turn left on Whitewater Road 2243. Follow this gravel route 7.4 miles to its end at a large parking area. Especially if you're leaving your car here overnight, leave no valuables inside and leave doors unlocked to discourage car clouters, an occasional problem here.

Fees: A Recreation Fee Pass (Northwest Forest Pass) is required to park here. The pass costs $5 per day or $30 per season.

Hiking Tips: Because this area is so popular, expect some restrictions, and expect that Wilderness rangers will be on hand to enforce the rules. Campfires are banned throughout the area and camping within 250 feet of the lakes is 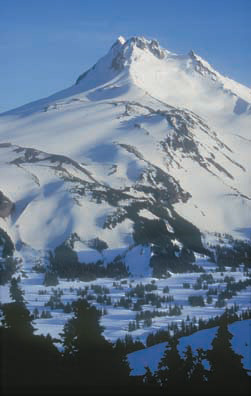 permitted only at approved sites marked with an embedded post.

From the parking area, the well-graded trail starts in an old-growth Douglas fir forest. Gradually you'll switchback up into a higher-elevation forest of true firs and beargrass. After 1.5 miles, turn right at a trail junction on a ridgecrest.

Breathtaking views of Mount Jefferson open up as the path climbs east along the ridge. At the 3.9-mile mark, a footbridge crosses Whitewater Creek in a meadow with shooting star, larkspur, and bleeding heart. At the Pacific Crest Trail (PCT) junction, turn left.

For the next 0.9 mile the trailside meadows become larger and prettier until the path reaches Jefferson Park - a vast plateau of heather, red paintbrush, lupine and clumps of wind-gnarled mountain hemlock. Here, unfortunately, a confusion of trails proliferate - left to Bays Lake, right to the head of Whitewater Creek. To follow the PCT, keep straight to the first glimpse of Scout Lake, then veer right.

One way to explore the area is to follow the PCT 0.7 mile across the park to large Russell Lake and return cross-country, either south through the heather or southwest to find the hidden lakes. Though chilly, these sandy-bottomed pools are among Oregon's most beautiful spots for a quick swim.

Geology: Mt. Jefferson is an apparently extinct volcano that has lost about a third of its original size to the erosion of glaciers. More than once, glacial lakes high on the mountain's north slope have breached their sand dams, flooding Jefferson Park. The result is a relatively flat, sandy plain with large open areas.