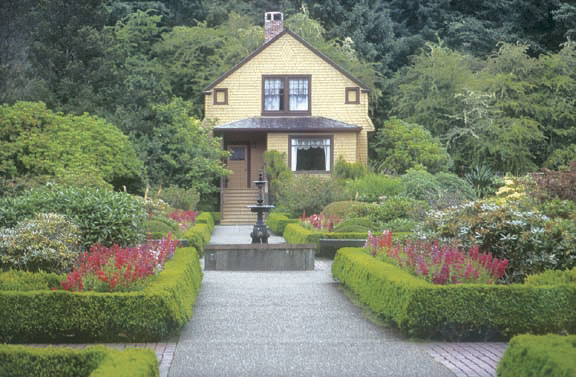 A millionaire's former seaside gardens, decorated with lights for the holidays.

Difficulty: An easy half-mile walk tours the gardens and Simpson Cove. For a longer hike, continue to Cape Arago on a fairly easy 4.6-mile loop that gains 550 feet of elevation.

Season: Open all year. Wave watching is best in winter, when 40-foot swells crash against the cliffs. From Thanksgiving to New Year's weekend a quarter million lights decorate the gardens. The garden's famous rhododendrons bloom from March through June.

Getting There: From Highway 101 in Coos Bay, follow signs 9 miles to Charleston and then continue straight 4 miles. A mile past Sunset Bay State Park, turn right into the Shore Acres entrance.

Fees: A $3 per car fee is charged at the park's entry booth.

Hiking Tips: From the oceanfront lawns at the far end of Shore Acres' parking area, walk to the observation building overlooking the sea cliffs. This is the site of timber baron Louis Simpson's original mansion from 1906 to 1921 and a replacement mansion from 1927 to 1948. Turn left along the cliff edge for a hundred yards and veer left to find the entrance to the fabulous formal gardens that remain from the estate. Explore the pathways here until you reach the Japanese garden at the far end.

Then follow the sound of surf through a gate to the paved path along the oceanfront. Turn left to descend to Simpson Cove. This hidden bay's charming beach makes a good turnaround point, especially for hikers with children.

If you're interested in a more substantial hike, hop the cove's inlet creek, take an unpaved path up a forested gully 300 yards to a T-shaped trail junction and turn left to the park's paved road. Look on the far side of the road for a "Cape Arago Pack Trail" sign. Follow this path uphill through a coastal rainforest of fir, spruce, waxmyrtle and alder for 0.3 mile. Briefly explore a fork to the right to find a roofless 4-room concrete bunker, a military observation post from World War II.

Then continue 0.9 mile along a wooded ridge to a marked fork. Take the right-hand path downhill 0.9 mile to a gravel road and turn left 0.1 mile to Cape Arago's paved road.

To return to your car on a loop, you'll have to turn right along the park's paved road for 0.7 mile, but traffic is light and the views are good. Beyond a sea lion viewpoint 100 feet, look for a trail post. The path that begins here touches the paved road only once on its 1.2-mile route back to your car.

History: North Bend timber baron and shipbuilder Louis Simpson bought this dramatic seaside estate as a 1906 Christmas surprise for his wife. The mansion included a palm room, a 52-foot heated indoor pool in the style of a Roman bath, rows of guestrooms and a 76-foot ballroom for the Simpsons' elaborate parties.

Louis Simpson's fortunes declined after World War I, when demand for wooden ships decreased. He lost a bid for governor and his wife died of kidney failure in 1920. After the mansion burned in a mysterious fire on the night of the Fourth of July, 1921, insurance paid only half of the loss.

Simpson moved temporarily into the caretaker's cottage, a building has survived to this day beside the formal garden. After one of his lumber ships wrecked nearby, dumping three million board feet of lumber on the beaches here, Simpson salvaged the wood to begin construction of a replacement mansion in 1927.

Work stopped on the rambling mansion when the 1929 stock market crash staggered Simpson's fortunes yet again. He moved out in 1936, sold the property to the state of Oregon for a mere $29,000 in 1942. The mansion was used briefly as a barracks in World War II and was burned by the state parks department in 1948.

Geology: The waves that crash into Shore Acres are slowly leveling the shore's tilted yellow sandstone strata, creating weirdly stepped reefs in the process. The shore plateau was similarly leveled by waves thousands of years ago before the coastline here rose.