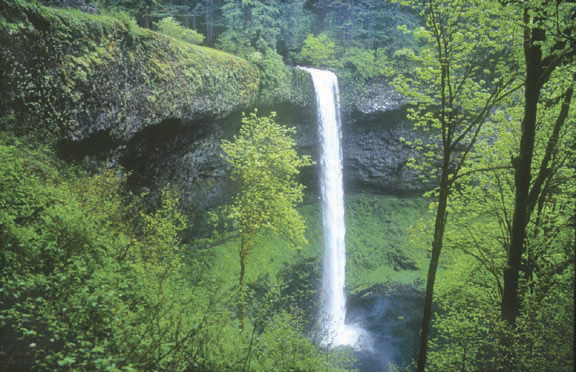 A spectacular canyon with 10 waterfalls

About the Hike: The popular trail through Silver Falls State Park's forested canyons visits 10 spectacular waterfalls, five more than 100 feet high. The path even leads through mossy caverns behind the falls' shimmering silver curtains.This loop is suitable for families with beginning hikers because side trails provide shortcuts back to the car. Dogs are not allowed on the trail.

Difficulty: The full loop to see all 10 waterfalls (from South Falls to North Falls) is a moderate hike of 6.9 miles, gaining 700 feet of elevation, but the recommended shortcut (omitting Twin and North Falls) trims the loop to 5.1 miles.

For a shorter, 2.8-mile loop, turn back after Lower South Falls. For an even shorter 0.7-mile tour, simply loop to the bridge at the base of South Falls.

Season: Open all year. The park is usually snow-free even in mid-winter, but the falls are still quite full and the wildflowers are at their best from late March to May.

Getting There: From Interstate 5 exit 253 in Salem, drive 10 miles east on North Santiam Highway 22, turn left at a sign for Silver Falls Park, and follow Highway 214 for 16 miles to the park entrance sign at South Falls.

Coming from the north, exit Interstate 5 at Woodburn and follow Highway 214 southeast through Silverton 30 miles.

In the South Falls parking complex, follow signs to Picnic Area C, and park at the far end of the lot.

Fees: A special $3-per-car fee is charged to park anywhere in the state park. 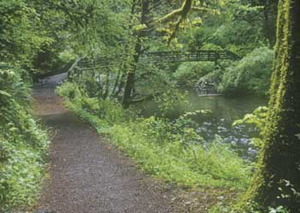 Hiking Tips: From the South Falls Picnic Area C parking lot, follow a broad path downstream a few hundred yards to historic Silver Falls Lodge, built by Civilian Conservation Corps crews in 1940. After inspecting this rustic stone-and-log building, continue a few hundred yards to an overlook of 177-foot South Falls. From here take a paved trail to the right. Then switchback down into the canyon and behind South Falls.

A few hundred yards beyond South Falls is a junction at a scenic footbridge. Don't cross the bridge unless you're truly tired, because that route merely returns to the car. Instead take the unpaved path along the creek. This path eventually switchbacks down and behind Lower South Falls' broad, 93-foot cascade.

Beyond Lower South Falls the trail forks again. If you're wearing down, you can turn right and climb the steepish ridge trail to the canyon rim and parking lot, for a total trip length of 2.8 miles.

If you're ready for a longer hike continue straight, heading up the north fork of Silver Creek to 30-foot Lower North Falls. At a footbridge just above the falls, take a 250-yard side trail to admire tall, thin Double Falls. Then continue on the main trail past Drake and Middle North Falls to the Winter Falls trail junction.

At this point, turn right for the recommended 5.1-mile loop. This path climbs to a parking area above Winter Falls. From there, keep right on a 1.6-mile return trail through the woods to the South Falls area, the lodge, and your car.

History: Silver Falls City, platted here in 1888, was an early center for logging and some fairly unsuccessful homestead farming. Future US President Herbert Hoover surveyed some of the land here while serving as a young engineer. 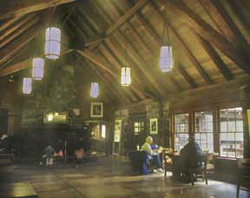 By 1900, June Drake, a Silverton photographer, began pushing for park status. His early photographs of the falls have become classics. An inspector for the National Park Service rejected the area for national park status in 1926, however, because logging had scarred the area with "thousands of stumps that from a distance look like so many dark headstones."

After that, the private owner of South Falls charged admission to let people watch as he floated derelict cars over the falls. In 1928 a paying audience watched daredevil Al Faussett canoe over 177-fout South Falls. He had to spend months afterward in a hospital, recovering from his injuries.

In 1935 President Franklin D. Roosevelt announced that Silver Falls would be one of his largest Recreational Demonstration Projects. He bought private land and employed young men in the Civilian Conservation Corps to develop park facilities. Since then the forest has regrown so that most visitors do not even notice that the area was once logged.

Geology: All waterfalls in the park spill over 15-million-year-old Columbia River basalt. At that time the Columbia River flowed through this area to the sea at what is now Newport. Repeated lava flows poured down the river channel from vents in Eastern Oregon, gradually pushing the river northward. As the lava slowly cooled, it sometimes fractured to form the honeycomb of columns visible on cliff edges. Circular indentations in the ceilings of the misty caverns behind the falls are tree wells, formed when the lava flows hardened around burning trees. The churning of Silver Creek gouged the soft soil from beneath the harder lava, leaving these caverns and casts. 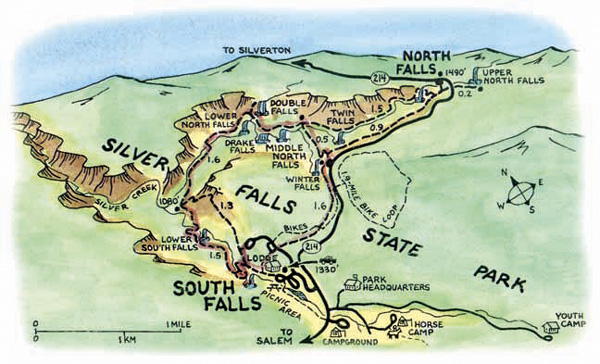