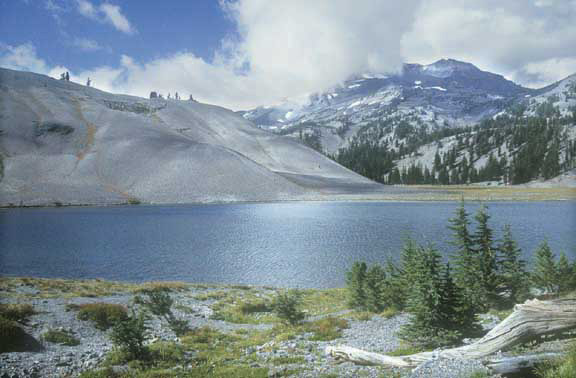 It's a non-technical but very demanding climb of the state's third-tallest peak.

About the Hike: Oregon's third-tallest mountain has a path to its top. Admittedly, the trail up 10,358-foot South Sister is exceedingly steep, long and rugged, but no technical climbing skills are required and the rewards are great.

From the summit - a broad, snowy crater with a small lake - you can see half the state. If this sounds too demanding, here's a secret: the loop to Moraine Lake, halfway up the mountain, is just as picturesque. This lower hike avoids the final trudge up cinder scree, yet still offers views 100 miles south to Mount McLoughlin. What's more, the weather's better here. The summit often generates its own little cloud, complete with whiteouts, wind, and a miniature blizzard.

Season: Open August to mid-October, but do not attempt the summit climb in anything but perfect weather. If there is a cloud on the summit, even on an otherwise sunny day, hikers could well encounter a blizzard whiteout at the top.

Getting There: Drive 28.5 miles west of Bend on the Cascade Lakes Highway. Beyond the Mount Bachelor Ski Area 6.5 miles, turn left at a Devils Lake Trailhead sign and park at the end of the campground loop.

Fees: A Northwest Forest Pass is required to park here. The pass costs $5 per day or $30 per season. It can be purchased at a ranger station, an outdoor store or at the trailhead fee box. 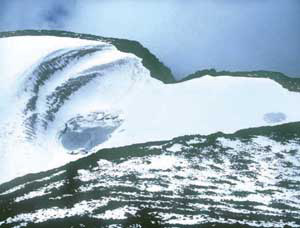 Hiking Tips: From the Devils Lake Trailhead, start out on the South Sister Climbers Trail. This path crosses a footbridge over glassy Tyee Creek before crossing the highway. Then the trail promptly launches steeply uphill through a dense mountain hemlock forest. After 1.5 grueling, viewless miles, the path emerges from the forest at the edge of a vast, sandy plateau. South Sister and Broken Top loom ahead. Signs at a 4-way trail junction indicate Moraine Lake is to the right, but to take the recommended loop to Moraine Lake, follow the "South Sister" pointer straight ahead.

This portion of the hike is a lark-strolling up the open tableland, admiring views of a dozen mountains and lakes. Wind-gnarled trees pose in occasional clusters. Scraggly, red-leaved dogbane plants dot the sand. At one point the trail splits, but the forks soon rejoin.

At the upper end of Moraine Lake's valley a side trail to the right dives down into the canyon. If you're taking the Moraine Lake loop, turn right and descend this steep, slippery trail. Use caution (and your hands) on the first, rugged 100-foot section of this path.

To complete the Moraine Lake loop, hike to the far side of the lake and follow the trail up the ridge to the right. The climbers' trail back to Devils Lake is 0.8 mile beyond. If you're backpacking, note that tents near Moraine Lake are allowed only at sites designated by a post. Campfires are banned.

If you're climbing South Sister, however, go straight at the junction at the upper end of Moraine Lake's valley. The next 1.2 miles steepen drastically to a resting point in a sandy saddle - the current terminal moraine of Lewis Glacier, overlooking a small green cirque lake. A climbers' trail from Green Lakes joins here on the right. The route to the summit heads up the ridge to the left.

After another 0.7 mile you'll crest the lip of South Sister's broad crater. Follow the rim right 0.4 mile to the summit, a rocky crest with a benchmark. Bend, Sisters and Redmond are clearly visible. To the north, the green Chambers Lakes dot the barren, glacial landscape below Middle Sister.

Geology: The Three Sisters formed within the past 100,000 years as part of the High Cascades, a string of similar volcanoes that extends from California to British Columbia. North Sister, the oldest of the "sisters," has been eroded to a summit plug of dangerous crags. South Sister, the youngest, still retains its uneroded conical shape. Its summit crater contains the state's highest lake, Teardrop Pool.

The Lewis Glacier carved Moraine Lake's U-shaped valley on the side of South Sister in the Ice Age. The glacier pushed rock and sand to its toe as a moraine-the rounded sandpile now cupping the lake. Later volcanic eruptions scattered pumice across the valley. Some of these floatable rocks are as big as basketballs.