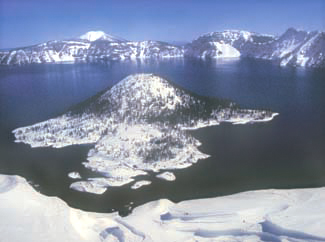 Hike to the Watchman, perhaps the best viewpoint in Crater Lake National Park.

About the Hike: High on Crater Lake's western rim, the Watchman's lookout tower commands an eagle's-eye view across the amazingly blue lake to Wizard Island. The steep little climb up the Watchman is one of the most popular paths in the national park. It's also short enough that you might want to extend the hike by taking an adjacent 2-mile path around Hillman Peak to a viewpoint above the Devils Backbone. Pets are banned on all park trails.

Difficulty: The easy 1.6-mile trip to the Watchman gains 413 feet of elevation.

Getting There: The Watchman Trail begins at a large, rail-fenced parking area and viewpoint on Crater Lake's Rim Drive. The parking area is not well marked, but you'll find it by driving 4 miles north of Rim Village or 2.2 miles south of the junction with the north entrance road.

Fees: Crater Lake National Park charges an entrance fee of $10 per day per car, or $25 per season.

Hiking Tips: From the parking area, follow a paved sidewalk along the highway 100 yards to the actual trailhead. Look here for the fuzzy seedheads of western pasque flower and the blue trumpets of penstemon.

The wide path - a portion of the long-abandoned 1917 rim road - traverses a rockslide of giant cream-colored boulders made of dacite. 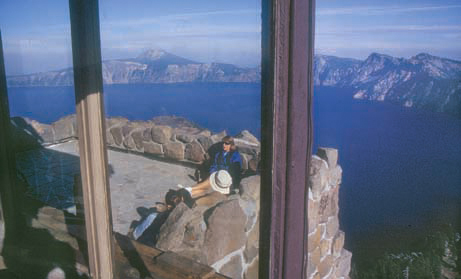 At the 0.3-mile mark, a snowfield lingers across the trail until August. Turn left at a junction just beyond the snow and climb 0.4 mile amid struggling mountain hemlock, white lupine, and patches of pinkish 5-petaled phlox. The summit tower, built in 1932, is staffed each summer with friendly rangers who help spot fires and answer hikers' questions. Soak in the view from the lookout's stone patio before heading back to your car.

If you'd like more exercise and different views, hike right on past your car and up a sandy ridge to find a trail that opened in 1995. This route skirts Hillman Peak for 2 miles, passing wildflower meadows, snow patches, rockfields with cat-sized marmots, and views across the Pumice Desert to the Three Sisters.

If you can't arrange to shuttle a car to the far end of the section-a lakeview pullout 2.2 miles from the Watchman's parking lot-turn back when the trail reaches a dramatic Crater Lake viewpoint beside the Devils Backbone. This craggy wall protruding from the lake's rim is a volcanic dike, formed when magma squeezed into a vertical crack inside ancient Mt. Mazama. 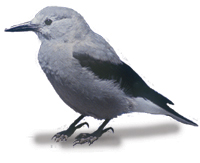 History: The Watchman won its name in 1886, when the U.S. Geological Survey set up a watch point here while surveyors in a boat sounded the lake with a reel of piano wire. Other names that stuck from that 1886 expedition are Cleetwood Cove (for the boat) and Dutton Cliff (for its captain). The survey recorded a maximum lake depth of 1996 feet-a figure that has since been corrected by sonar to 1958 feet.

Geology: The rocks exposed along the trail are dacite, originally part of a 50,000-year-old lava flow on Crater Lake's predecessor, a large volcano known to geologists as Mt. Mazama. After Mt. Mazama blew up its summit in a cataclysmic eruption 7700 years ago, the old lava flow was left as the Watchman, a crest on the gaping caldera's rim. Since then the caldera has sprouted a cinder cone (Wizard Island) and gradually filled with water.