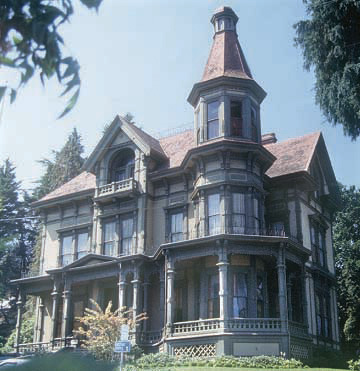 Explore docks, museums and Victorian mansions in a salty city near the fort where Lewis and Clark wintered 200 years ago.

About the Hike: From the barnacled piers of cannery docks to the painted gingerbread of Victorian mansions, this picturesque city on the Columbia River wears its history with a salty pride. A walking tour samples the old town's sights.

Fees: None, but there is an optional $1 fare for the trolley and there are admission fees for museums along the route.

Hiking Tips: Start at the Columbia River Maritime Museum, a first-rate interpretive center on Astoria's waterfront where you can spin the wheel of a replica steamboat pilothouse, walk the bridge of a World War II destroyer, or watch the rotating prisms of a lighthouse's lens. Other exhibits feature shipwrecks, fishing and early exploration. Hours are 9:30-5 daily. Admission includes a boarding pass to the adjacent lightship Columbia that served as a floating lighthouse at the river's entrance until 1979.

In front of the museum you'll pass a trolley stop for "Old 300," a restored 1913 San Antonio streetcar that passes about every 45 minutes in summer (weekdays 3-9 pm, weekends Noon-9 pm), as well as Friday through Sunday in fall, and on non-stormy weekends in winter. For $1 you can ride as long as you like on the 2.8-mile track along Astoria's waterfront.

A promenade also follows the trolley route, so you can either walk or ride the first 0.7 mile of the recommended loop tour, heading west past docks, shops, offices, restaurants and fish-packing plants to Sixth Street. Here detour briefly to the right to climb a viewing platform on a pier beside the river's main shipping channel.

Then head inland a block on 6th Street, turn left beside busy Highway 30, and keep straight on quiet Astor Street for three blocks. At 10th Street turn right two blocks to Astoria's business district, turn right on Commercial two blocks to the county courthouse, and turn left on 8th Street to the Flavel House, a museum in a sumptuous Queen Anne-style mansion built by a Columbia River bar pilot.

Stop here to buy a $3.50 brochure describing 64 historic buildings along the next mile of the walking tour's route. Or simply follow the zigzagging route on the map here, admiring the elegant churches and ornate homes, several of which have been converted to bed & breakfast inns. A few blocks before returning to your car at the riverfront museum you'll pass a replica stockade tower built on the site of the original Fort Astoria, where the city began in 1811.

History: Lewis and Clark's Corps of Discovery paddled past Astoria in November 1805. They camped across the Columbia River to reconnoiter and to plant a flag to claim the area for the United States. Then, discouraged by the rain and wind along the river, they voted to move six miles south of present-day Astoria to build a more hospitable winter encampment, Fort Clatsop. After 112 mostly rainy days in the fort, they packed up their few supplies in canoes and headed back east across the continent.

A visitable replica of this log fort was destroyed by fire in the fall of 2005. Work is under way to rebuild the popular destination. An informative interpretative center was not involved in the fire and remains open.

American fur tycoon John Jacob Astor sent a crew to build a trading outpost at the site of Astoria in 1811, founding the first permanent American settlement in the Oregon Country. A free display and a replica of one tower are on the site at 15th and Exchange. In summer from 11 am to 3:30 pm, volunteers give talks describing the fort's checkered past.

After Astoria had boomed as a shipping center at the mouth of the Columbia River, Captain George Flavel built a turreted, Queen Anne-style mansion here in 1885. Flavel had profited handsomely from the dangers of river navigation as a Columbia River bar pilot. Elegantly restored and furnished with period antiques, the house at 441 8th Street is open daily 10 am to 5 pm.