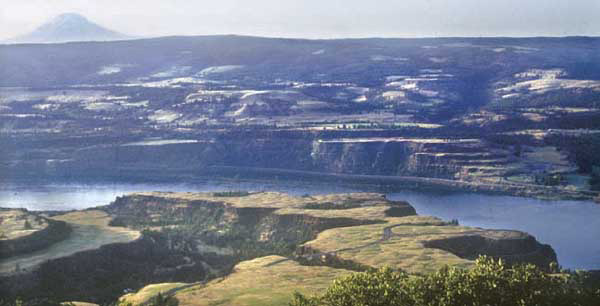 A plateau of early spring wildflowers overlooking the Columbia River.

About the Hike: This cliff-edged plateau of oak grasslands and wildflowers belongs to the Nature Conservancy, a non-profit group that quietly purchases ecologically sensitive land. The preserve has two public trails: an easy path that passes several ponds to a cliff overlooking the Columbia River, and a steep trail that climbs to a panorama atop McCall Point.

Because this is a nature preserve, dogs, horses and bicycles are not allowed. Camping, flower picking and off-trail hiking are also banned. And remember to wear long pants if you're taking the upper trail, as it passes poison oak.

Difficulty: An easy, level 1.1-mile trail ambles across the plateau to the river viewpoint. The tougher trail to McCall Point gains 1,100 feet in 1.7 miles.

Season: Open all year, but the best time to visit this dry eastern end of the Columbia Gorge is spring, when flowers dot the slopes. Grass widows are at their showiest in mid March, while yellow balsamroot and blue lupine peak in late April. Avoid the heat of July and August.

Getting There: From Hood River, drive Interstate 84 east to Mosier exit 69 and follow "Scenic Loop" signs 6.6 miles to the Rowena Crest Viewpoint parking area. From The Dalles, take Rowena exit 76 and follow the old Columbia River Highway west to the viewpoint.

Hiking Tips: The easy path to the lower plateau starts at a stile and signboard on the opposite side of the old Columbia River Highway from the Rowena Loop Viewpoint's entrance road. In spring, look here for balsamroot, purple vetch, bachelor buttons, and white yarrow. Ten-inch-long ground squirrels zip about the fields from February to June but hibernate the other seven months.

After 0.3 mile take a right-hand fork of the trail around a pond full of lilypads and cattails. Listen for the melodious warble of western meadowlarks. The trail loops past a cliff-edge viewpoint and returns to the main trail. Continue out the plateau past a smaller, poison-oak-fringed pond, and reach trail's end at a cliff above the Columbia. Note the eight layers of basalt in the opposite cliffs, evidence of the lava floods that deluged Eastern Oregon and created this plateau 10 to 17 million years ago.

To try the steeper path up McCall Point (open May through October), return to the parking area and look for a trail sign on the right at the start of the parking loop. This path joins an ancient road and turns left along the rim edge. When the trail forks at a large signboard, switchback up to the right on a steep path. The trail switchbacks steeply up the ridgecrest through scrub oak (and poison oak) to a summit meadow with glorious views of Mt. Hood, Mt. Adams and the entire eastern Columbia Gorge.

History: This eastern segment of the Columbia River Highway was mostly the work of Conde McCullough, a brilliant young engineer who joined the state highway department in 1919. McCullough is famed for the airy, arching concrete bridges he designed, especially here and along the Oregon Coast (for example, in Newport and Coos Bay).

The name Tom McCall Point honors the maverick Oregon governor who, when given a chance to promote tourism on the CBS Evening News in 1971, bewildered a nationwide audience by telling them to "Come visit us again and again. This is a state of excitement. But, for heaven's sake, don't come here to live."

The lanky, unpredictable politician dared to oppose pro-growth business interests and fought instead for Oregon's quality of life. Oregonians re-elected him by a landslide. When McCall passed away, locals proposed renaming Mt. Washington or even Mt. Hood in his honor. Finally his name landed here, on a promontory overlooking the Columbia Gorge, the traditional gateway for Oregon newcomers.

Geology: Ice Age floods roared repeatedly down the Columbia Gorge, caused by a glacier that dammed a giant lake in Montana. Although the last such flood was 12,000 years ago, it covered this plateau 200 feet deep, scouring it to bedrock. Since then, eruptions of Mt. St. Helens have dumped a total of three feet of ash here.

Although this volcanic soil must have been evenly distributed, now you can notice the powdery dirt is heaped into low, circular, 50-foot-wide humps. These mysterious "biscuit mounds" are particularly obvious in evening light. Early geologists attributed the phenomenon to everything from glaciers to ground squirrels. Today the most widely accepted theory is that earthquakes shook the powdery soil together, in the same way that tapping a cookie sheet makes an even layer of flour collect in rhythmic piles.