Discover Oregon's tallest waterfall from both the bottom and the top

About the Hike: Oregon's most popular trail climbs to viewpoints at Multnomah Falls, a 542-foot, two-tiered plume that plummets into a misty, mossy forest grotto.

Getting There: Drive Interstate 84 east of Portland 31 miles to Multnomah Falls exit 31, park, and walk under the overpass.

Hiking Tips: When you start out from the parking area, you'll pass a historic 1925 stone lodge, a good place to pick up a map or a quick ice cream cone. Walk to the left of the lodge, straight toward the falls to find the paved trail switchbacking up to a stone bridge between the two segments of Multnomah Falls' long cascade.

The trail here has seen more than its share of natural drama. In 1991 a forest fire swept across the path, stopping just short of the lodge.

In 1996 a bus-sized chunk of the waterfall's cliff broke loose, landed in the splash pool, and sprayed rock splinters past the bridge.In 1998, torrential rainstorms launched a gigantic landslide of rocks, mud and trees that wiped out the trail and kept it closed for a year.

If your courage holds, continue on the reopened path past the stone bridge. Keep right at junctions to climb to a fenced overlook on Multnomah Falls' lip. The dizzying view aims down the cataract to the toy-sized lodge and its ant-like crowds.

If you're not yet ready to turn back, consider continuing on a 5.4-mile loop to see the area's other waterfalls. From the viewpoint at the top of Multnomah Falls, follow the Larch Mountain Trail up Multnomah Creek 0.7 mile. Then turn right on the Wahkeena Trail. This path climbs for 0.9 mile and then descends past Fairy Falls to an elegant stone bridge below Wahkeena Falls, a 242-foot triple cascade in a sculpted chute. 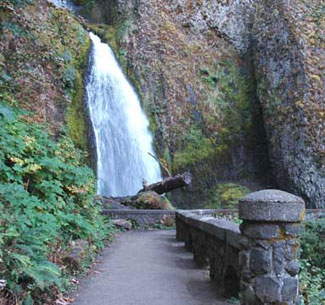 Continue down to a parking area on the old Columbia River Highway. Rather than walk back to your car on this narrow road's shoulder for 0.8 mile, take the Return Trail that parallels the road through the woods.

History: On July 6, 1915, dignitaries officially opened the Columbia River Highway by driving from Portland to Hood River. At that time, Oregon still only had 23,000 automobiles and Portland wouldn't have a stoplight for another 22 years.

The road was designed as a tourist attraction - something for motorists from Portland to enjoy on a day trip. A simple roadside inn stood at the base of Multnomah Falls from opening of the historic Columbia River Highway until 1925, when a loop around Mt. Hood was completed.

For that grand opening, Multnomah County authorized renowned Portland architect A. E. Doyle to build a lodge of stone in the style of National Park lodges.

Geology: The cliff at Multnomah Falls exposes six layers of basalt lava flows, stacked like chapters in a stone history text. The Columbia River has been migrating northward for the past 25 million years, shoved around by lava flows like these. Originally the river flowed past what is now Mt. Jefferson, reaching the ocean near Salem.

As the Coast Range rose, the river stretched farther west to the Newport area. Then came the basalt lava floods, pouring west from Hells Canyon and down from the Cascade volcanoes. The eruptions repeatedly filled the old river channel. Because the river itself was flowing south from headwaters in Canada, it kept carving new channels on the northern edge of the lava flows.

Today the Columbia Gorge is riddled with cross-sections of the river's old routes, cast in stone. 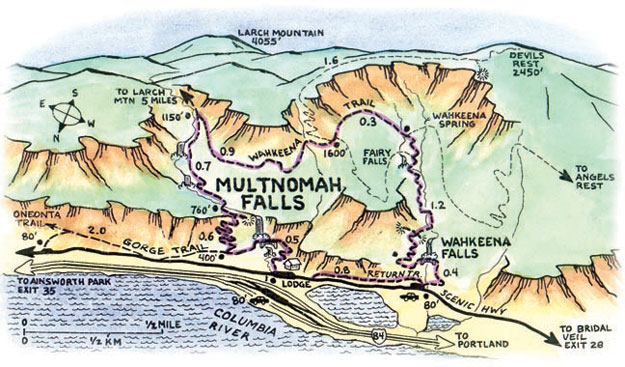