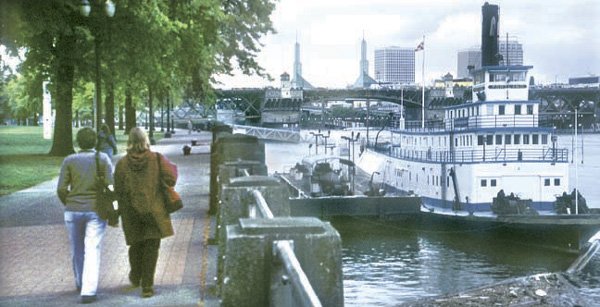 Amble through parks and historic streets in Oregon's largest city

About the Hike: Wedged between the Willamette River and a wall of steep, forested parks, Portland's downtown is compact enough to explore on a two-hour walking tour.

Allow extra time to stop at museums and shops and if you tire along the way, simply catch a streetcar, train or bus - they're all free.

Getting There: It's easiest to take MAX, Portland's rapid transit train, downtown to the recommended starting point at Pioneer Courthouse Square (6th Avenue and Yamhill Street). If you're driving on Interstate 5, follow City Center signs and look for one of the many city-owned Smart Park parking structures downtown.

Hiking Tips: Begin at Pioneer Courthouse Square, a brick plaza with a coffee shop above ground and a travel bookstore below ground. The bookstore offers free maps of downtown.

For the recommended walking loop, head across the square to Yamhill Street and walk downhill alongside the 1869 Pioneer Courthouse. At the next corner, veer left into Pioneer Place, cutting diagonally through this four-story shopping atrium. Then zigzag another two blocks toward the river to the Dekum Building, an ornate office tower built in 1892 solely from materials native to Oregon.

Walk onward another block to Stark Street and you'll pass the gothic 1879 Bishop's House, converted from a Catholic bishop's home to a Chinese tong's headquarters, a speakeasy and finally a restaurant. Turn left at the corner onto Old Town's Second Avenue. Notice the high-water marks of Willamette River floods on the stone building at 133 Second Ave.

Then turn right on Ankeny Street at the New Market Theater, an 1875 building modeled after London's Covent Garden. Cross First Street to the soothing water sounds of the 1883 Skidmore Fountain, donated by a Portland druggist to quench the thirst of "horses, men, and dogs."

The next block fills with the arts and crafts vendors of Saturday Market on weekends from March through December. Cross the Naito Parkway to the lawns of Governor Tom McCall Waterfront Park and turn right on a promenade along the riverbank's concrete seawall. Here you'll pass the salvaged mast of the 1893 USS Oregon. 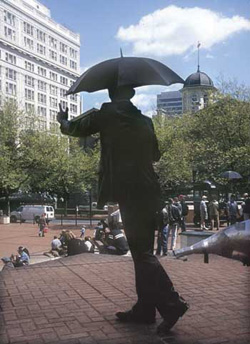 A few blocks beyond the Morrison Street bridge, head inland to Salmon Street Springs, a gigantic fountain with 185 computer-controlled jets. After a few blocks on Salmon Street, angle across Lownsdale Square, a park block donated in 1852 at a time when an elk was still said to graze here. The current elk statue dates to 1900.

As you continue up Main Street from the elk you'll pass the Portland Building, a post-modern office tower that raised eyebrows in 1983 for its daring angles and its teal-rust-cream color scheme.

A few more blocks up Main Street brings you to the Portland Center for the Performing Arts. Beyond this concert hall, detour briefly left along the Park Blocks to the Oregon History Center (Open 10 am-5 pm Tuesday-Saturday and noon-5pm Sunday; adults $6, students $3). Across the street and down one block is the Portland Art Museum (Open 10 am-5 pm Tuesday-Saturday and noon-5 pm Sunday; adults $10, children $6). Both are worth an extended visit.

Then turn around and walk north through the park blocks. At Taylor Street, detour left to visit the stately Multnomah County Central Library, built in 1913 and renovated in 1997. A block later, turn right at the corner of the Galleria. With a 75-foot atrium, this building opened in 1910 as the first department store west of the Mississippi. Then walk back beside the MAX rail lines to conclude your loop hike at Courthouse Square.

History: Portland began as a riverside clearing where Multnomah Indians occasionally camped. When entrepreneur Asa Lovejoy stopped for lunch in that clearing with a drifter named William Overton in 1843, he offered to front the 25-cent filing fee if Overton would claim the site as a homestead and deed him half the land. They marked the site with tomahawk blazes.

Today Portland's Old Town encompasses roughly the first three blocks west of the Willamette River, from the Burnside Bridge area south to the Morrison Bridge. Several of the 19th-century stone, brick and cast-iron-fronted buildings are lively pubs, but not as many as in the 1870s, when Portland had one saloon for every 40 inhabitants.

In those days, riverfront docks were two-storied, with an upper level used during spring's high water. The lower levels became hangouts for shanghai men, who delivered unwary passersby for forced service on merchant ships to China.

Pioneer Courthouse Square has seen many changes since the city founding in 1843. The dense forest originally on this site was shipped as timber to California during the 1848 Gold Rush. The resulting stumps, painted white to prevent pedestrians from tripping over them in the dark, won Portland the disparaging nickname "Stumptown on the Willamette."

Portland's first real schoolhouse was built here in 1858. But the school came down in 1883 to make way for the Portland Hotel, a seven-story Queen Anne chateau that fell in 1950 to make way for a parking lot.

In the 1970s, 64,000 citizens donated money to create the present public plaza. Their names remain engraved on the square's paving bricks. Sidewalk artwork near the square includes whimsical bronze statues of otters, bears, beavers, a deer and a commuter with an umbrella. 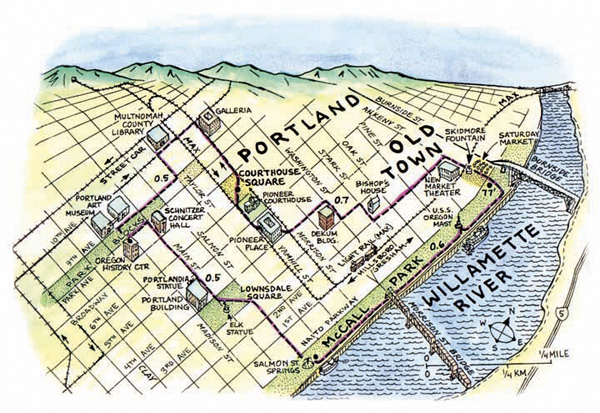